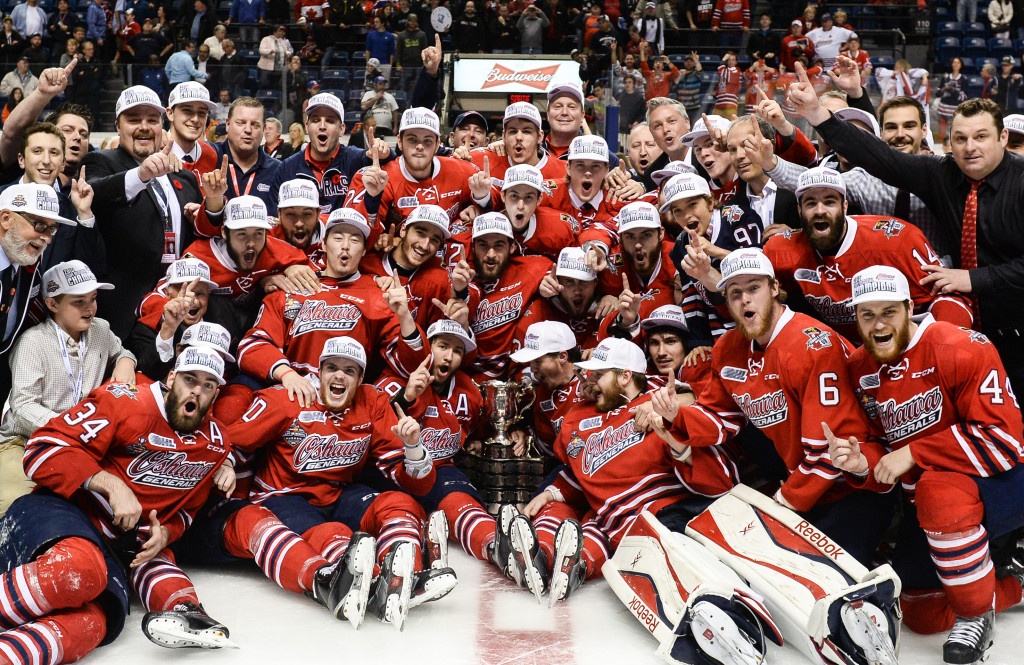 Photo above by Aaron Bell/OHL Images.

With a 2-1 OT win over the Kelowna Rockets, the Generals are the 2015 MasterCard Memorial Cup Champions. Anthony Cirelli, who made the team out of training camp as a free agent, was the hero of the game, scoring both goals including the game-winner less than two minutes into extra time. The win marks the fifth time the franchise has captured the trophy, making the Generals the team with the most Memorial Cup wins, of all current and active CHL teams.

As 2015 MasterCard Memorial Cup Champions, the Generals have brought the Memorial Cup back to Oshawa for the first time since 1990, which is exactly 25 years ago. This is also the first time the Memorial Cup returns to the OHL since 2010 by the Windsor Spitfires. In addition, the Generals are the first OHL Eastern Conference team to capture the title since the Ottawa 67’s did so in 1999. The winning team in Windsor was coached by DJ Smith, while current Assistant Coach Eric Wellwood, was on the roster. This title gives DJ his third Memorial Cup as a coach in the OHL, and Wellwood his third, with the first and second as a player.

GAME RECAP:
It wasn’t the start they were hoping for after being down a goal after 20 minutes, but overall the Gens looked strong in the first. With some good pressure in the Rockets’ zone, they looked in control of the puck and play during the opening period. It was Tomas Soustal who scored the first goal of the night to make it a 1-0 game for Kelowna after 20.

The Rockets killed off two back-to-back penalties in the middle frame. Just after the second man-advantage, it was Anthony Cirelli who evened the score for Oshawa after he beat Whistle over the shoulder for his first of the tournament. Dakota Mermis and Josh Brown picked up the assists on the opening Gens goal. The second ended with the score knotted at 1-1, leaving it up to the final 20.

It was a long 20 minutes in the third, with both teams unwilling to give up a goal. The game ended in overtime for the second time this tournament for Oshawa. Tobias Lindberg led the rush with a pass to Chris Carlisle, which Cirelli was able to bang home just 1:28 into overtime. Cirelli’s OT goal marks the ninth Championship overtime winner in MasterCard Memorial Cup history. With three over-agers on the team, Josh Brown, Chris Carlisle and Dakota Mermis ended their OHL careers on a high note. All three d-men were crucial throughout the season and tournament.

To celebrate the success of the 2015 Champs, the City of Oshawa and the Gens will hold a parade and celebration. Click here for details.