Zachary Paputsakis Commits to the Generals 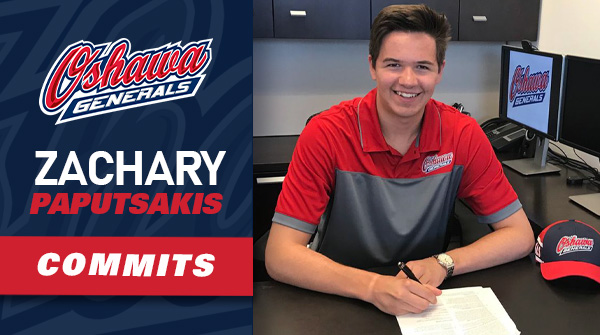 Oshawa, ON– The Oshawa Generals announced today that goaltender Zachary Paputsakis has committed to an Ontario Hockey League standard player agreement with the team.

The Rockland, ON native was a 5th round selection by the Generals in the 2017 OHL Priority Selection. This past season, Paputsakis played in the USHS-Prep league for the Kimball Union Academy Wildcats, a team based in Meriden, New Hampshire. He finished the 2018-19 season with a .923 SAV % and 1.81 GAA.

“Zach is a big goalie that will come in here and compete for the number one job,” said Vice President and Generals Manager, Roger Hunt on the signing. “There’s good and bad times to come to an organization and this is a good time for a goalie to be joining our team.”

The 6’3, 185-pound goalie participated in the Generals orientation camp in 2017 and 2018, earning invites to the main camp both years.