Winning streak on the line in Peterborough 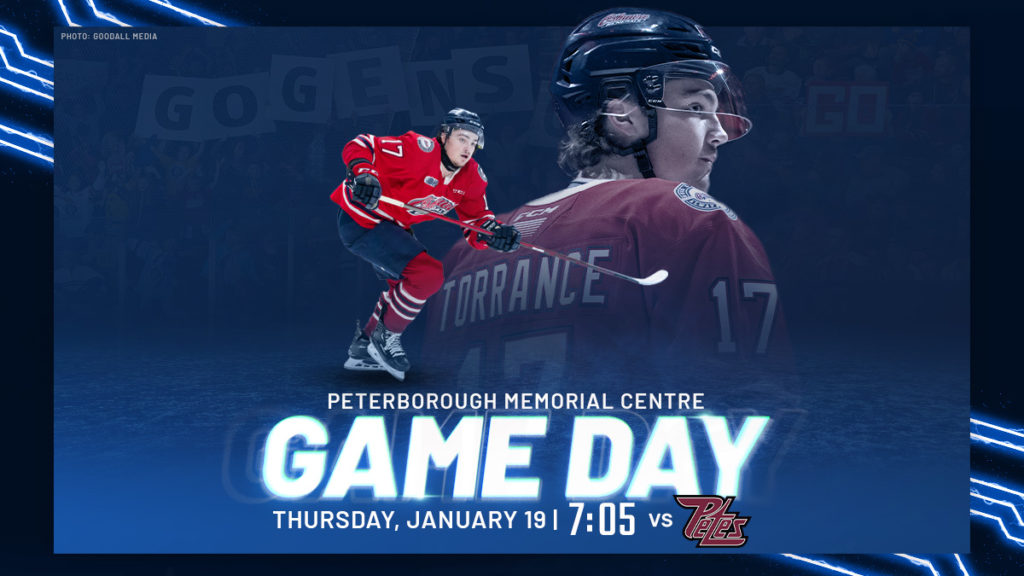 Oshawa, Ont., – The Generals take their three-game winning streak into the less-than-friendly confines of the Peterborough Memorial Centre for a Thursday night matchup.

While still sitting ninth in the Eastern Conference, the Generals have appeared to find a bit of a stride midway through January. Kicking off the winning streak over East Division rival, the Hamilton Bulldogs, the Gens have consistently been finding the back of the net.

Beating the Bulldogs 3-2 sparked a bit of an offensive renaissance. Oshawa then made their only visit to Kitchener and defeated the struggling Rangers and former captain Lleyton Moore 5-2, on national t.v. to boot. The Gens then crossed the border for the final time this year to meet up with the Erie Otters. Oshawa came out with another impressive victory, this time by a score of 4-1.

Over the win streak, there have been many Gens earning their time in the spotlight. Calum Ritchie had what many would say was his best game of the season in Kitchener, scoring two goals – number 13 and 14 on the season. Add an assist for his efforts and Ritchie finished his TSN debut with three points. Not to be overshadowed in the weekend of wins is OA forward and newly appointed alternate captain, Ryan Gagnier. In two games, he put in back-to-back three-point efforts, including a two-goal night in Erie. With 18 goals on the season, Gagnier has surpassed his previous career high of 17 goals in 27 fewer games.

Oshawa’s offense may be clicking, but it might be the recent goaltending that has been more impressive. After trading former starting goaltender, Patrick Leaver, it looked like the crease may be a touchy subject for the remainder of the season. The goaltending duo of Carter Bickle and newly acquired Jacob Oster did everything they could to prove there is nothing to worry about.

Making his TSN debut, Carter Bickle put on a show for the national audience, stopping 32/34 shots from the Rangers, including multiple 10-bell saves. His performance in net earned him save of the night across the OHL. It was his second win in four games.

The very next night, Oster made his Generals debut and it did not disappoint. Stopping 26/27 shots, Oster kept the Generals’ lead strong throughout the entire game, sending the more than 4,500 Otters fans home without a victory to cheer for. It was Oster’s 10th win of the year and is an indication that his season is about to take a turn for the better with his new team.

Peterborough enters tonight’s game off a disappointing loss to the sixth-seeded Kingston Frontenacs on Monday night. Despite outshooting the Frontenacs 45-30, the marron and white could only get one single shot through Mason Vaccari, who got the start over the usual number one, Ivan Zhigalov. Peterborough leads the season series 3-1 and currently sits fourth in the Eastern Conference with a record of 22-15-1-2.