Tilson’s legacy one of countless reasons the OHL Remembers 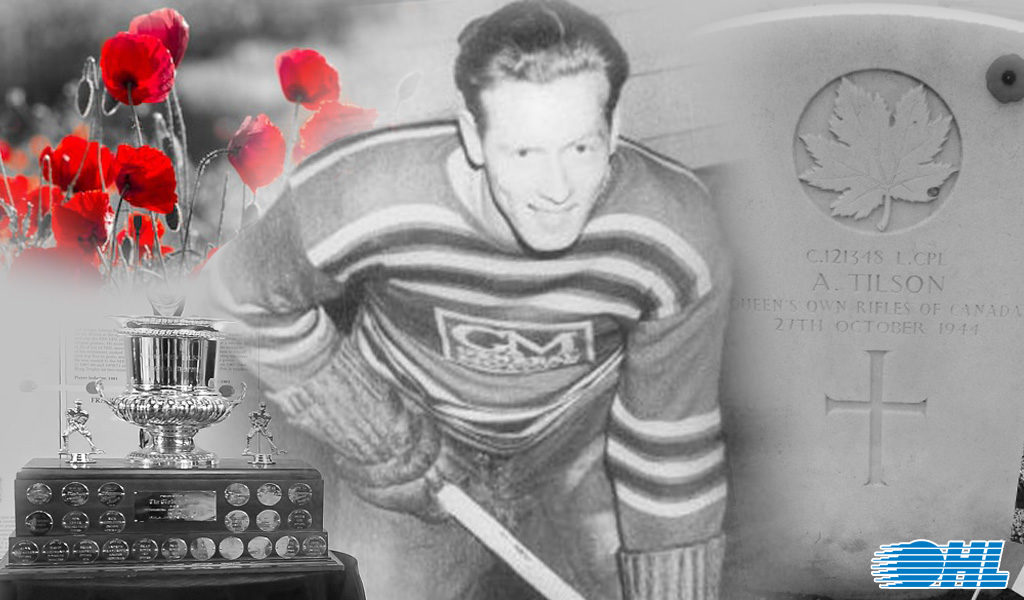 The Ontario Hockey League’s most prestigious individual award is named in his honour, and he’s one of countless reasons we take pause to Remember on November 11th.

Albert ‘Red’ Tilson played two seasons with the Oshawa Generals from 1941-43 before enlisting in the Canadian Armed Forces on May 27, 1943 in Kingston, Ont. at just 19 years of age. Tilson’s two-year stint included a pair of J. Ross Robertson Cup titles with the Generals as he also won the Eddie Powers Trophy as the League’s leading scorer in 1943, finishing with 19 goals and 38 assists.

Tilson would serve in World War II with the Queen’s Own Rifles of Canada, and was killed in action on October 27, 1944 in the Netherlands. He is interred in the Adegem Canadian War Cemetery near Maldegem, Belgium.

“Hockey will forever be indebted to the men and women who have served our country and paid the supreme sacrifice for our freedoms,” said OHL Commissioner David Branch. “It is important that all Canadians never lose sight of the service of Red Tilson and the countless men and women just like him who have enabled us to live in the greatest country in the world because of what they have done for all of us.”

Tilson’s No. 9 uniform was retired by the Generals on November 12, 2006, a ceremony that included Gus Leonard, who played hockey with Tilson in the armed forces, and Bob Attersley who was the Generals’ first ever recipient of the Red Tilson Trophy.

Donated by The Globe and Mail and first presented in 1945, the Red Tilson Trophy continues to be presented to the OHL’s Most Outstanding Player as voted by the League’s writers and broadcasters. Recent winners have included Ottawa’s Marco Rossi in 2020, Sudbury’s Ukko-Pekka Luukkonen in 2019 and Sarnia’s Jordan Kyrou in 2018.

On November 11, remember those who served and sacrificed for freedom. #CanadaRemembers pic.twitter.com/7wMzWWvdTW