Teddy Bear Toss through the years 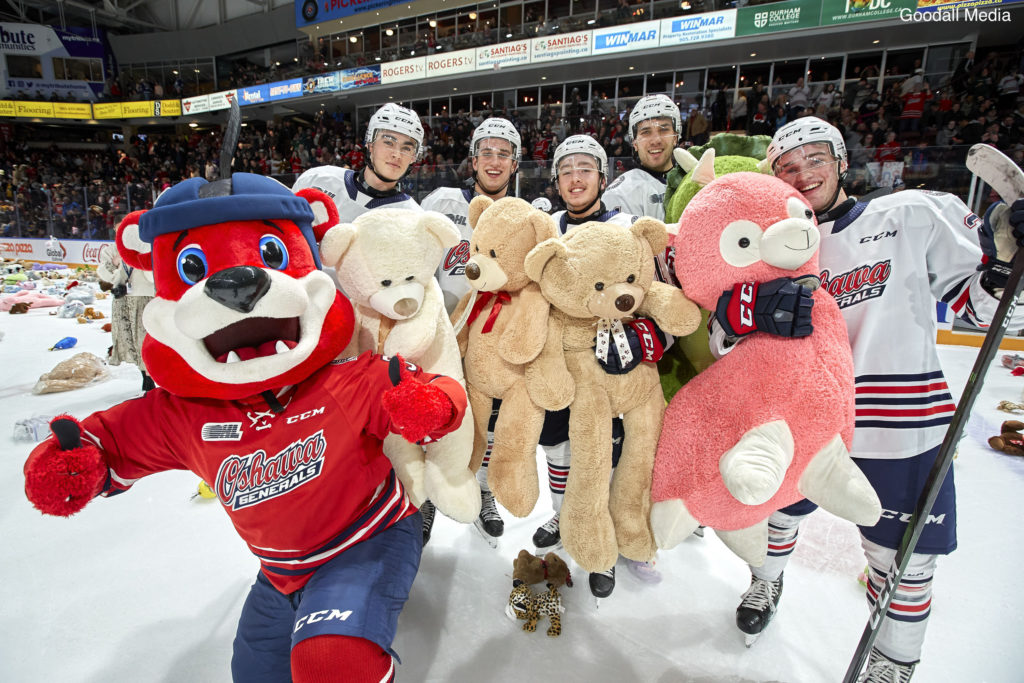 Oshawa, Ont., – A tradition that began in Oshawa 23 years ago, will add another chapter this Sunday, December 11th, when the Generals host their 24th Annual Teddy Bear Toss game, against the visiting Barrie Colts. Behind only the Kitchener Rangers streak of 27 years, Oshawa has the second-longest Teddy Bear Toss tradition in the Ontario Hockey League

Oshawa’s first ever Teddy Bear Toss took place at the old Civic Auditorium, in 1998 when defenceman Jim Baxter scored against the Peterborough Petes to start the cascade of bears to the ice. In its first-ever event, Gens faithful donated more than 1,300 bears to children in need.

As any tradition does, it continued to grow over the years, with almost every single year seeing an increase in bears from the year before. Before the Civic Auditorium closed, and the now Tribute Communities Centre was open, it saw eight renditions of the Teddy Bear Toss game, collecting 16,498 bears over that span. The largest Teddy Bear Toss collection at the Civic Auditorium was its final time hosting the event when the Generals collected 2,717 bears after now New York Islanders forward Cal Clutterbuck scored against the Bellville Bulls.

When the Generals moved arenas to play at the Tribute Communities Centre, attendance rose and so did the bear totals. On December 10th, 2006, Corey Cowick scored the first Teddy Bear Toss goal in the new building, reigniting the tradition with a new era of Oshawa Generals fans.

The very next year, a Teddy Bear Toss moment went down in Generals history when Patrick Asselin THOUGHT he scored the all-important goal. Asselin’s goal brought down a new record high of 3,626 bears, before his goal was called back. That’s right, for the first time in Generals’ history, the Teddy Bear goal didn’t count. Six minutes later Asselin scored again, this time for real, and all was right in GensNation.

Throughout the years, fans continued to fill the building for the holiday tradition, breaking attendance and bear records with each new edition of the game.

That honour belongs to the 2014 edition when Michael Dal Colle’s goal against the Niagara IceDogs brought 6,072 bears down to ice level. The year before, Dal Colle also had the honour of scoring the Teddy Bear Toss goal, bringing more than 5,500 bears to the ice.

Despite the success of the tradition in getting bears to kids who need them most in Durham Region, the Generals haven’t seen success on the ice in a Teddy Bear Toss game since the 2013 toss, when they defeated the Bellville Bulls 5-2. It was their seventh straight victory on Teddy Bear Toss night. Now, the Generals are riding a six-game losing streak on the game, scoring only the eventual Teddy Bear Toss goal in four of those games.

This season, the Generals will return to hosting the Teddy Bear Toss in its traditional form, following two years of Drive-Thru Toss taking place in wake of the COVID-19 pandemic. In the last two years, GensNation has braved not only the pandemic, but cold, windy and rainy weather to continue the tradition by donating canned goods, winter clothes, and of course teddy bears.

The 24th annual Teddy Bear Toss takes place this Sunday at 6:05 p.m. at the Tribute Communities Centre when the Generals host the Barrie Colts. For tickets, please click here.