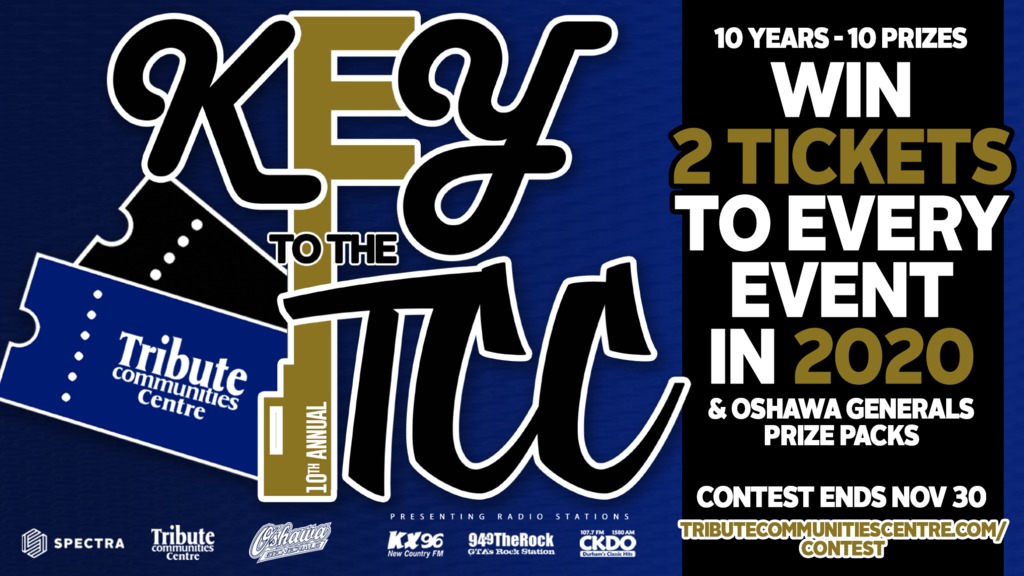 (Oshawa, ON) – Spectra, the providers of Venue Management to the Tribute Communities Centre, are thrilled to launch the tenth annual “Key to the TCC” contest presented by KX96, 94.9 The Rock, CKDO Radio and the Oshawa Generals which will award 10 prizes to celebrate the tenth year including 2 tickets to every event in 2020 at the Tribute Communities Centre for the Grand Prize Winner. The Key to the TCC (GMC) contest originated in 2010 and has evolved into a corporate initiative with more than 20 other Spectra-managed venues participating in the Big Ticket Giveaway.

Numerous events have already been added to the Tribute Communities Centre’s 2020 event calendar including Brantley Gilbert, We Will Rock You: The Musical on Tour, Harlem Globetrotters, and Miranda Lambert. “There is a lot more to come for the 2020 event calendar and we’re only giving fans one tip to win this year’s contest,” stated William Balfour, Spectra’s Assistant General Manager and Director of Marketing & Group Sales at the Tribute Communities Centre. “You can’t win without entering. This is our tenth year of the contest, and every single year the winner has been completely shocked to get the call and we’re sure this year will be no different.”

The only real difference for this year’s contest is that there will be more prizes – a total of 10 to be exact. Nine runners-up will receive tickets to an upcoming Oshawa Generals game and a piece of Generals’ merchandise so the chances to win have increased.

There has been a total of nine past winners of this contest so far, and they’ve all been able to experience a variety of event genres over the years. “I have had a great year getting to attend so many amazing concerts and Generals games,” said Allyson Polidano, the 2017 Key to the TCC winner. “My favorite was the I Love the 90’s concert where 10 of my girlfriends took over a row and sang the words out to every song. I lost my voice for a couple days after. I love a concert where everyone is dancing and singing.”

“Winning the Key to the GMC was truly amazing and also a real eye opener,” expressed Bob Parr, the winner of the 2011 Key to the GMC(TCC) contest. “At the time, I had no idea what a great facility it was for every type of event. In my view, the quality of content and talent at the centre in the last five years has grown by leaps and bounds.”

The Key to the TCC contest, presented by KX96, 94.9 The Rock, CKDO Radio and the Oshawa Generals is running until Saturday, November 30, 2019 at 11:59pm ET and fans can enter now at www.tributecommunitiescentre.com/contest along with the full contest rules and regulations.