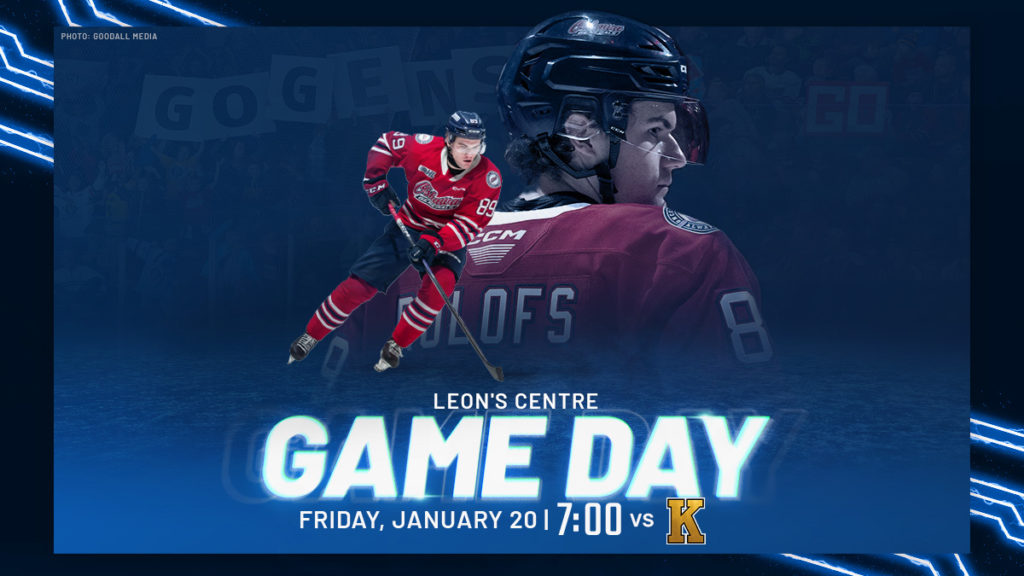 Oshawa, Ont., – After six straight games on the road, Oshawa will play away from the Tribute Communities Centre one more time before coming home, this time in Kingston.

This season-long road trip of seven games comes to an end after tonight’s matchup at the Leon’s Centre, when the Generals take on the Kingston Frontenacs for just the third time so far this season. A win tonight would give the Gens a winning record on the trip, a record that currently sits at 3-3 during the stretch.

The trip started back on January 5th and 6th in North Bay and Sudbury respectively. Oshawa dropped both those games, before coming back south and taking down the new-look Hamilton Bulldogs on January 8th. Last weekend included stops in Kitchener and Erie, a weekend that couldn’t have gone better for Oshawa, taking all four points onto the bus with them.

Last night was game six of the trip, at the familiar Peterborough Memorial Centre. Despite a strong start, and yet another impressive outing from the newest General Jacob Oster, a marker from Brennan Othmann with 51 seconds left in the game was the decider for the Petes. Oster stopped 35 shots in the tight loss.

Tonight, a very important pair of points are available for both sides, a chasing Generals team and a Kingston team doing all they can to stick to the middle of the conference.

As mentioned, this is just the third meeting between these two teams this season, and the first in Kingston. Both teams looked much different in their last meeting back on October 23rd, with Oshawa dressing the likes of Brett Harrison, Lleyton Moore and Patrick Leaver, while the Frontenacs countered with Franceso Arcuri, Jackson Stewart, and Braeden Hachè – all of whom have been traded to new teams.

While he wasn’t on the roster the last time the two teams met, Kingston has also traded World Junior gold medalist and Seattle Kraken prospect Shane Wright to the Windsor Spitfires.

Kingston is now led offensively by Matthew Soto and newly acquired Ethan Meidema, so Oshawa will need another strong goaltending performance to take a winning record on the trip back to Oshawa.

Fans can enjoy the game on Rogers TV Durham or through CHL TV, with puck drop scheduled for 7:00 p.m.