Revenge on the mind with Petes in town 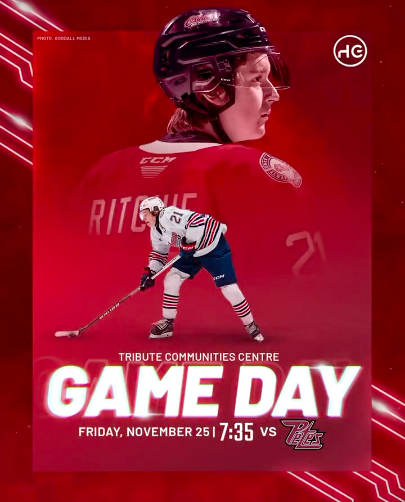 Oshawa, Ont., – If there was any time to snap the nine-game losing streak plaguing the Oshawa Generals right now, it would be tonight. Arch rival and high-flying Peterborough Petes are making their second visit to the TCC this season and third match up all together against the Generals. Oshawa has lost both games against their rivals so far this season. It will be a much different game at the TCC this Friday, as both teams are featuring much fuller lineups.

The last time the Petes came to town, they were missing much of their starting six defensemen, and even had their leading scorer, at the time, Connor Lockhart logging minutes from the backend. Since then, the Petes have not only gotten players back from injuries, but they have also hit the trade market by acquiring New York Rangers prospect and former Flint Firebird Brennan Othmann.

Oshawa enters the game riding a now nine-game losing streak, with their most recent loss coming less than a week ago to the Sarnia Sting, 6-5 in overtime.

With a season-high crowd expected, make sure you get your tickets early! Doors open at 6:35 with puck drop scheduled for 7:35 p.m.

The last time these two teams clashed was eight days ago in Peterborough, where the Petes took it to the Gens, defeating Oshawa 4-0. There wasn’t much that went Oshawa’s way at the Peterborough Memorial Centre last Thursday, as they were outshot 22-5 and already down 3-0 just 20 minutes into the game. The Gens were able to hold Peterborough off for much of the remaining 40 minutes, losing only 4-0 after trailing 3-0.

Lleyton Moore: Now leading the team in points, with 16, captain Lleyton Moore has seemed to have found his offensive touch. Last weekend, Moore tallied five points in two games, including one goal and four assists. With Oshawa’s production slowly beginning to improve, its no surprise their blueline quarterback is starting to see his efforts turn into goals as each game passes.

Stuart Rolofs: Scheduled to return to the lineup tonight, Rolofs missed the last three games for personal reasons. Before missing three games, Rolofs was amongst the team leaders in every offensive category, and during the 4-0 loss to Peterborough a week ago, it was an obvious subtraction to not have in the lineup. Now, expected to return, look for Rolofs to make up some lost ground and help push his Generals to an upset win over the Petes.

Brennan Othmann: The New York Rangers prospect has settled in well since being acquired by the Petes, scoring three points in his first three games in Peterborough. His lone goal in the maroon and white came against the Generals last Thursday when he scored their fourth and final goal of the contest. The Pickering, Ontario native has already amassed 27 points in just 19 games and is ranked 8th in league scoring.