GAME PREVIEW: Rival Frontenacs Visit Generals with Vengeance on their Minds at 7:05pm 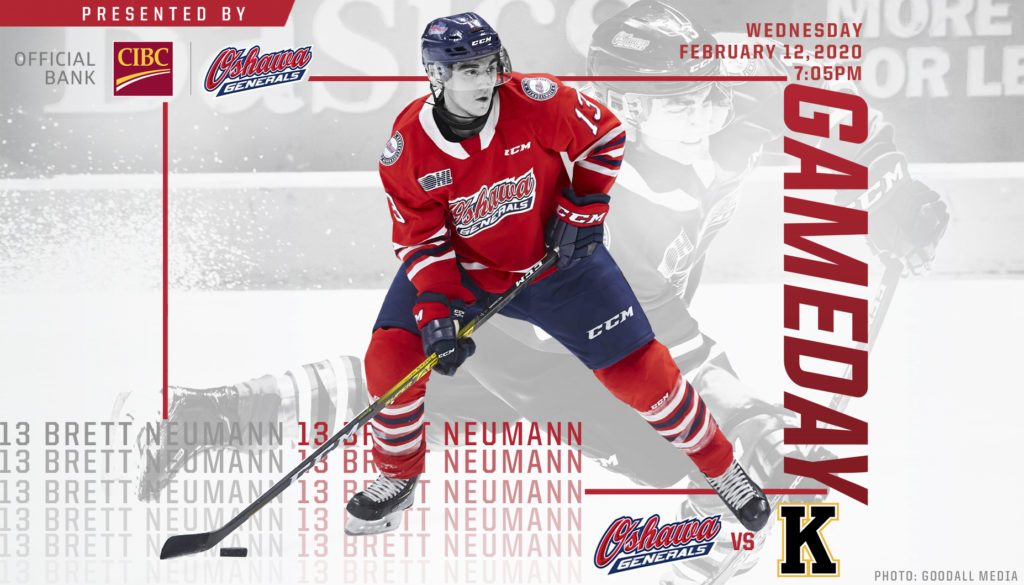 Oshawa looks to beat the Frontenacs for the fifth time this season, and Kingston looks to redeem themselves after a 5-4 near-comeback loss to Mississauga on Sunday. Kingston found themselves down 4-0 early on but made a four-goal comeback in the second half of the game bringing the game even only to have it taken away by Steelheads leading scorer James Hardie with 54-seconds remaining.

The Frontenacs have fought back from a cavernous start to the season, but if they play their cards right, could find themselves in a playoff spot come the end of March. With many bright young stars on the roster, Shane Wright, Martin Chromiak and more to come, Kingston could be a dangerous team in the coming seasons.

This is the sixth of eight times these teams will meet this season. Oshawa holds a 4-1 season series lead over the Fronts.

The last time Kingston came to the TCC, the Fronts got off to a quick start, Shane Wright scored first, then Oshawa answered with three consecutive goals including the first of Liam Whittaker’s career. Oshawa didn’t look back from there and ended up posting four more throughout the rest of the game taking a commanding win. There were six different goal scorers for Oshawa in the 7-4 victory. Phil Tomasino lead the team with one goal and four assists. Other notes from that game: it was host of the celebration of the 30 year anniversary for Oshawa’s 1990 Memorial Cup Championship and was Brett Neumann’s 300th career game.

Brett Neumann, C/LW – Neumann has been the Generals’ rock offensively this season. Acquired from the Frontenacs last season at the trade deadline in a deal that sent Nick Wong the other way. Neumann has been a rockstar for Oshawa with 56 goals and 100 points in 79 games wearing a Generals sweater – the most over that span of time. Neumann is smaller, but fleet of foot. A specialist in the faceoff dot, Neumann has recorded a 58.4% faceoff win percentage. Neumann loves having the puck on his stick and has one of the more iconic goal celebrations on the team – an expression of pure excitement. He had a scuffle with his former teammate Zayde Wisdom the last time Kingston came to town, that could be a recurring incident tonight.

Brett Harrison, C –  The Generals first round pick of 2019 has been as advertised. Harrison has proven to be a solid depth scorer this season, currently sitting in sixth in the point scoring race. Still four months before his seventeenth birthday, Harrison is a big boy at 6-foot-1, but has yet to fill out his frame, at 172 lbs. Harrison is just as dangerous passing as shooting, he has a nearly-even goals (15) to assist (14) total. Harrison is sure to be a big part of the future in Oshawa.

Martin Chromiak, LW – Chromiak was the second player selected in the CHL import draft in 2019 and he has lived up to that billing. Chromiak came over in the new year, picking up a deflection goal and an assist in his first game with the team. The last time he faced your Generals, he put his talent on display scoring a goal and adding two assists. He currently holds a five-game point streak scoring ten points over that span. Chromiak has a gnarly wrist shot and also likes to pass. He’s found strong chemistry early on with the exceptional-Shane Wright.