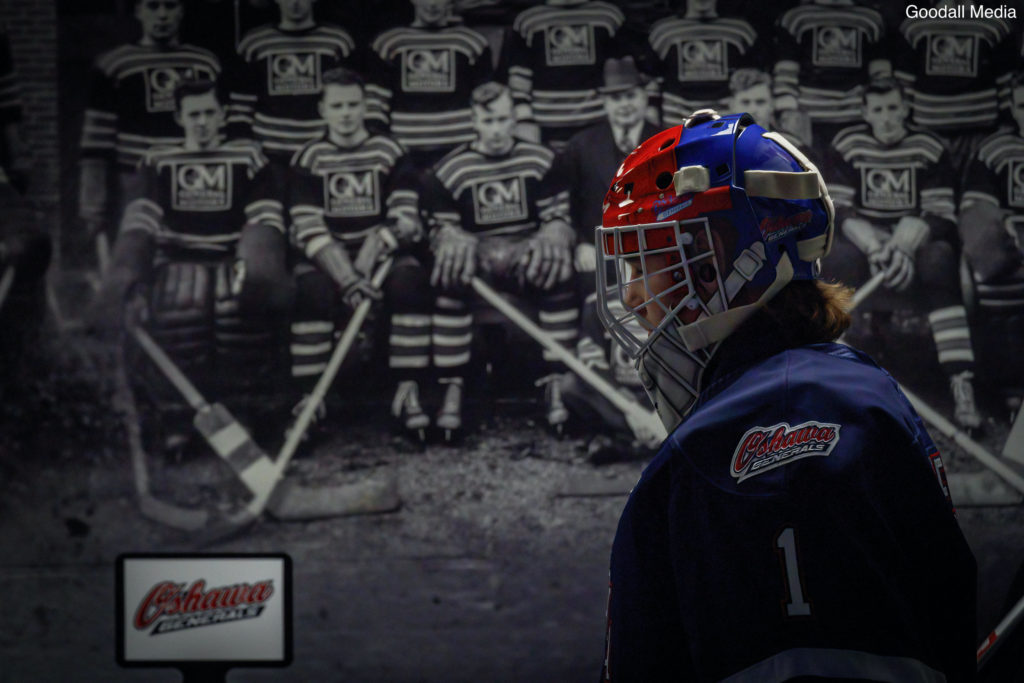 Oshawa, Ont., – On Thursday, May 5th, NHL Central Scouting released their final rankings, listing their top prospects for the 2022 NHL Draft. One Oshawa General found his name on the list. Patrick Leaver’s stellar second half of the season propelled him to 16th among all North American goaltenders.

Leaver had a rookie season many OHL goaltenders could only dream of, highlighted by goaltender of the week honours on three occasions.

In his first season in the OHL, Leaver played to a record of 22-19-2 and cemented himself as the starting goalie at the beginning of the season. He finished the regular season with a 3.20 GAA, 0.908 save percentage, and two shutouts. Many a times this season, Leaver was capable of stealing games for his team when they needed them most, including big wins over the Mississauga Steelheads, Kingston Frontenacs and North Bay Battalion in the final stretch. He was instrumental in the Generals clinching a playoff spot in the final week of the regular season.

“It’s definitely a cool surprise to see my name up there,” says Leaver when asked if he saw the rankings. “From not being ranked at all at the start of the year to just climbing the rankings like I did all season, it just means a lot.

And boy, did he ever climb the rankings. During the Midterm Rankings released in January, Leaver found himself ranked 29th among North American goaltenders and 6th among OHL goaltenders but used a strong second half of the year to jump 13 spots to 16th, and 3rd ranked among his OHL peers.

Leaver says it feels really nice to know others have noticed his hard work.

“All the work I put in and my consistency throughout the year is obviously paying off and for it to be seen by others is pretty special,” he says. “Whatever happens at the draft, I know I’ll just be going into next year even better with the intention to just build off of my first season.”

“First, I think it’s too low,” says Hunt. “When he was thrown into the fire with us, he proved he’s capable of stealing games but also winning games.”

“Whoever takes a chance at Patrick this July, they’re taking a safe chance.”

The 2022 NHL Draft takes place over two days, with the first getting underway on July 7th and rounds two through seven on July 8th from the Bell Centre in Montreal, Que.