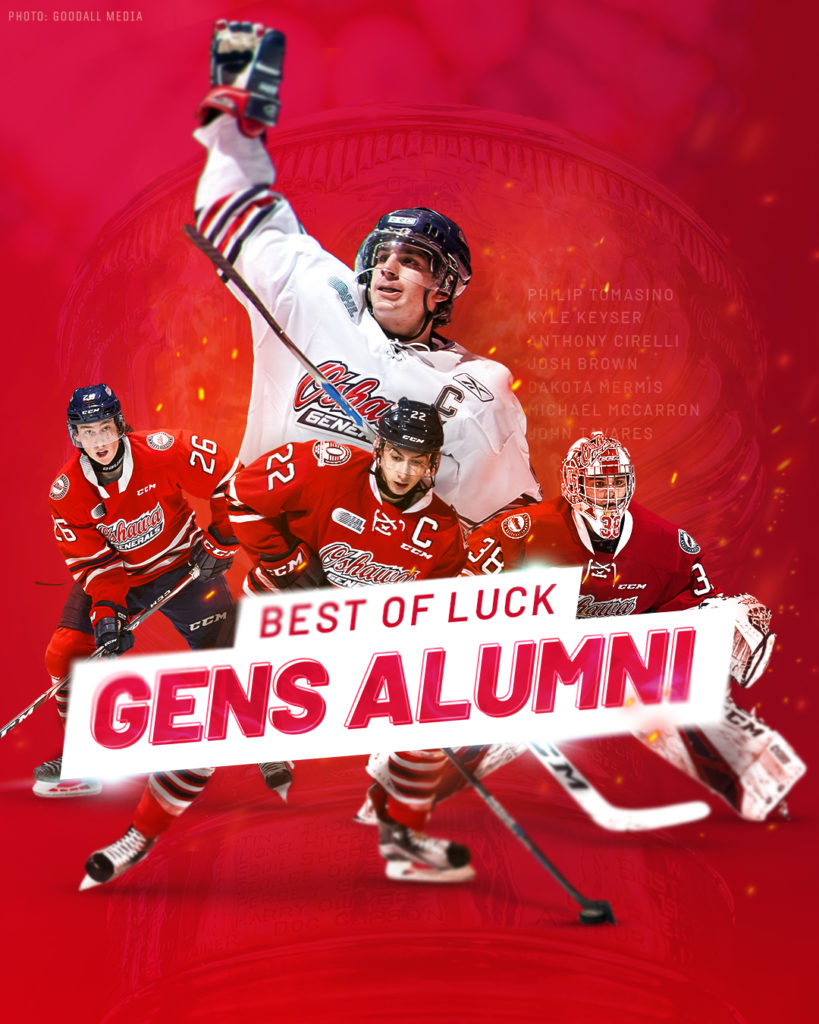 Oshawa, Ont., – While the Generals’ run at a record 14th J. Ross Robertson cup was cut short, their alumni are carrying on the winning legacy, representing #GensNation across the NHL and its Stanley Cup Playoffs.

This will be Brown’s second trip to the postseason following his first appearance with the Florida Panthers in 2019-2020. He played two games. Boston acquired the defenceman at the NHL’s trade deadline this year in exchange for Zach Senyshyn and a 2022 fifth-round pick from the Ottawa Senators. Brown has played 171 career NHL games since graduating from the OHL and has scored 17 points. Brown played his entire OHL career with the Generals, totaling 220 regular-season games and 41 playoff games, en route to an OHL Championship and Memorial Cup Championship in his final season.

Kyle Keyser joins the Bruins as a depth goalie for their playoff season. Throughout the 2021-2022 season, Keyser suited up in 33 games for the AHL affiliate Providence Bruins and proved to be a steady option in the crease, sporting a 2.75 goals against average and a 0.908 save percentage. Keyser is expected to continue his tenure with the AHL Bruins at this time, but is a dependable option for the NHL club should the Bruins need him. Keyser’s last taste of playoff hockey came in the Generals exciting 2018-2019 playoff run. He suited up in 18 games and lead the Generals through two series victories with a 2.83 goals against average and a 0.925 save percentage. He is remembered by much of #GensNation for standing on his head in the team’s 2nd Round series against the higher seeded Niagara IceDogs, where the team won four straight games to upset Niagara in six games.

Heading west a bit to the State of Hockey, one Gens alumnus has worked his way through the minors and onto the roster of the Minnesota Wild. Dakota Mermis has played in just two games with the NHL Wild this season, but almost a full season with their AHL affiliate in Iowa. Mermis adds depth to the Wild’s blueline should he needed to be called upon. In his 59 games with the AHL Wild, Mermis has scored three goals and added 21 assists for 24 points. His tenure with the Generals was short but was a key addition in the 2015 Memorial Cup run, after being traded to Oshawa from London. Mermis’ career is full of OHL postseason experience with 51 playoff games over three seasons, including two OHL championships, and three trips to the Memorial Cup Championship.

If we move south, we’ll find two more former Generals who again were only here a short time but played BIG roles during their time here; Michael McCarron and Philip Tomasino.

The 2021-2022 season marked the first full-time NHL season for the 6’6 forward from Grosse-Point MI., including career highs in goals and assists with seven each. While this may have been McCarron’s first complete season at the NHL-level, he has appeared in a previous post-season, playing one game with the Montreal Canadiens in 2016-2017.  McCarron was the other half of the Generals 2015 blockbuster trade alongside Dakota Mermis from the London Knights. Between the Knights and Generals, McCarron appeared in 30 OHL playoff games, scoring 12 goals in that stretch. Pair that with his OHL and Memorial Cup Championships and McCarron is used to a winning mentality. The Predators may be in tough against the high-flying Colorado Avalanche, but McCarron is a physical presence that can turn the tide of any shift.

Philip Tomasino is also coming off of his first full season in the NHL, appearing in 76 games for the Predators. Tomasino scored 11 goals and 21 assists in his rookie season, good for 32 points. This will be his first taste of the NHL postseason but not his first taste of playoff hockey. Tomasino appeared in 21 OHL playoff games, all with the Niagara IceDogs, before being traded to the Oshawa Generals. In the 2019-2020 season he surely would have taken over the OHL playoffs that season as one of the best forwards in the league, but as we all remember the season was paused and then cancelled due to COVID-19.

The sunshine state is home to #GensNation’s favourite player in recent memory, Memorial Cup hero Anthony Cirelli. Cirelli has cemented himself as an everyday NHL-er and at only 24 years old is already a 2-time Stanley Cup Champion. Nicknamed captain clutch for his OHL heroics, Cirelli continues to be big in big moments, including the Eastern Conference championship goal during the Lightning’s bubble season. He has already appeared in 294 NHL games for career totals of 66 goals and 93 assists. In the postseason he continues to be a depth scoring threat any NHL lineup should fear, scoring 11 goals and 15 assists in his young career. Of course, Gens fans are no stranger to Cirelli’s winning ways, scoring both goals in the 2015 Memorial Cup Final, including the OT winner. The very next season he scored the OHL Championship OT winner for the Erie Otters.

Last, but not least, John Tavares is entering his seventh Stanley Cup Playoffs, and his fourth with his hometown Toronto Maple Leafs. Not much needs to be said about Tavares’ already stellar NHL career, and the one thing he is missing on his trophy shelf is a deep run capped off with the Stanley Cup. Only once in his career has his team made it past the first round. In a year where many see as the one the Leafs finally break their first round curse, maybe Tavares can captain his way through not only the first round, but all four. In the OHL, Tavares saw playoff action on three occasions, 26 games with the Generals and 14 with the London Knights, totalling 2o goals and 36 assists.

Could 2022 be the third straight year an Oshawa General lifts the Stanley Cup? Let us know below who you think has the best chance to lift hockey’s ultimate prize! 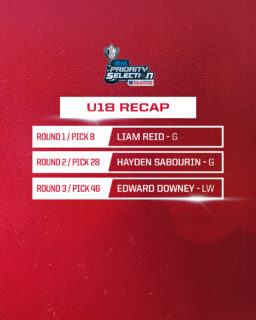 Generals make three selections at U18 Priority Draft
2 weeks ago