Once A General, Always A General: Kyle MacLean 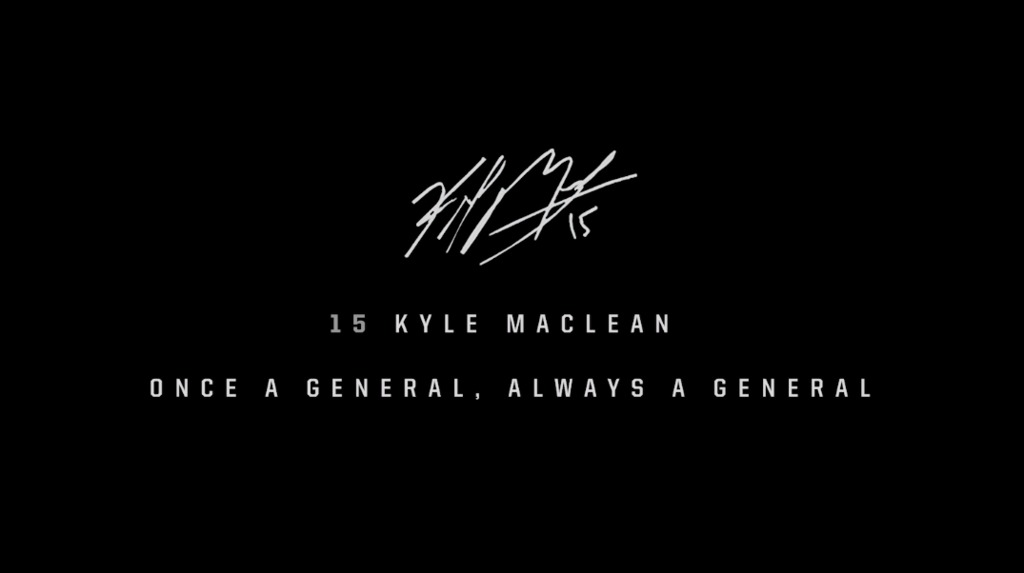 Captain Kyle MacLean closed out his final season with a bang. He became and early fan favourite and even though he’s American by birth he holds strong family ties to the region. His grandparents reside in Oshawa and have been longtime season ticket holders of the team. His father, John, donned the Gens’ red-white-and-blue from 1981-84 and went on to more success in the NHL with a lengthy career and now is an Assistant Coach with the Arizona Coyotes.

MacLean has been a leader on and off the ice since his arrival in the ‘Shwa. He had an ‘A’ plastered on his shirt for a season and a half and was a key member of the Generals leadership core for his ‘lead by example’ mentality. After the trade of Gens Captain Jack Studnicka last season, MacLean was the quick selection as his successor for the ‘C.’

“Kyle was the logical choice as the next guy to lead our organization,” said Head Coach Greg Walters upon making the announcement. “He defines what the organization is all about and what we stand for. He is the hardest working guy on and off the ice, he never quits, he plays for his teammates before himself and will put his individual success aside for a team win. When we as a coaching staff go into the room with a message, he is always one of the guys following what we are saying and leading by example.”

MacLean upped his production after being named captain – finishing the season with 18 goals and 60 points through 68 games played. He stood out maintaining that production through the long playoff run with 13 points through 15 games.

Mac returned this season after signing a contract with the AHL’s Bridgeport Sound Tigers. He came back to great fanfare seven games into this season and didn’t miss a beat scoring six points in his first four outings.

He closes his OHL career with the third most games played in a Generals sweater with 278. He was able to crack the 50 goal mark in his career finishing with 51 and leaves as the two-time defending recipient of the Heart of a General Award for personifying what it means to be an Oshawa General. He also closes his career with a healthy amount of league recognition, earning back-to-back appearances in the coaches’ poll awards – winning in the Best Defensive Forward (twice) and Best Penalty Killer categories.

Mac leaves Oshawa leaving behind a legacy of quiet leadership and hard work. A young man whose lack of presence will leave a hole in not only the locker room, but in the whole of GensNation. Once a General. Always a General.