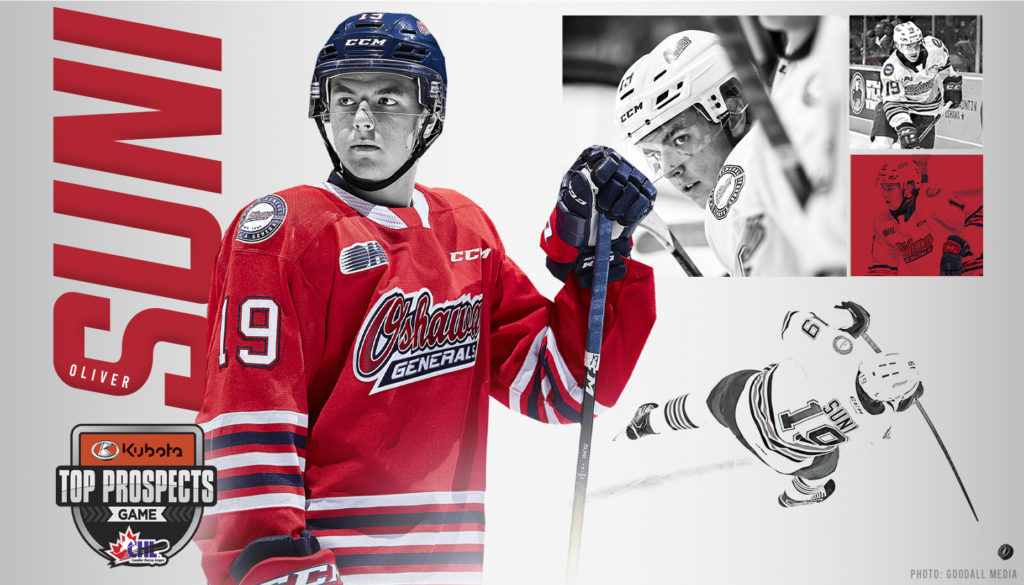 Oshawa, ON– The Oshawa Generals in partnership with the Canadian Hockey League and the Ontario Hockey League announced today that Finnish forward, Oliver Suni, has been named to the 2020 Kubota CHL/NHL Top Prospects Game on January 16th in Hamilton, ON.

The Kempele, Finland native was the Generals first round selection in the 2019 CHL Import Draft this past June. He was a member of the Karpat Oulu B in Finland during the 2018-19 season where he tallied 19 goals and 17 assists for 36 points in 23 games played.

The 6’2, 195-pound, right shot forward, has previously represented his country at the U17 World Hockey Challenge, recording three assists in six games at the tournament. In August, he played for Finland in the Hlinka Gretzky Cup tallying three assists in three games.

This season with the Generals, Suni is leading the team in rookie scoring with eight goals and fifteen assists in 23 games played. He currently sits third in league rookie scoring. NHL Central Scouting last ranked the Finnish forward a ‘B’ level player in its latest list to be published.

“It’s a great testament to Oliver and his play thus far this season to be named to this game,” said Vice President and General Manger, Roger Hunt, on the announcement. “It’s an honour to be able to play in a prestigious showcase game such as the CHL/NHL Top Prospects Game and we’re proud as an organization to have Oliver representing the Generals in this game.”

Read the CHL Press Release and other players named to the game–click here!