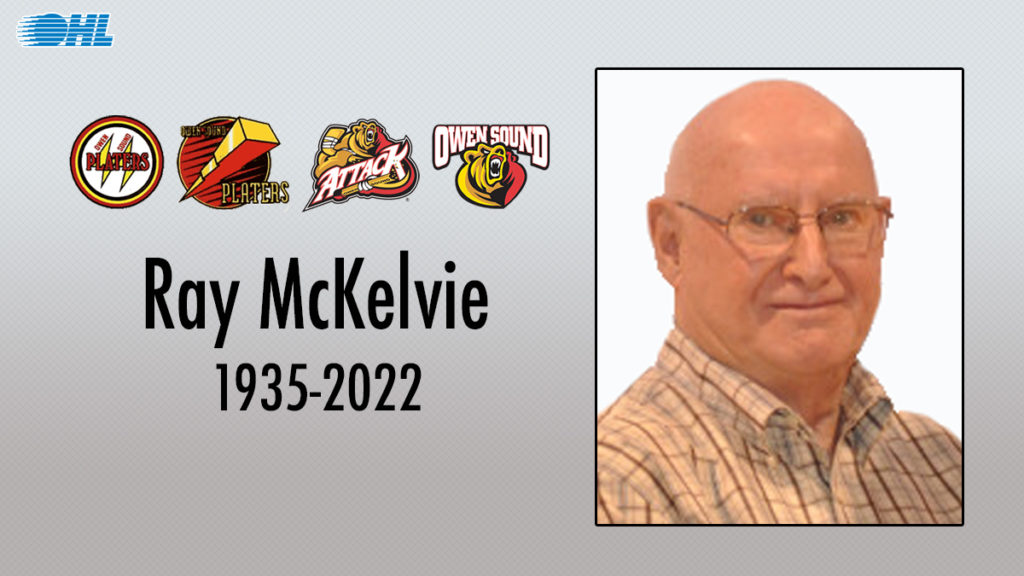 The Ontario Hockey League is mourning the loss of a builder and tremendous contributor to the game and his community. Long-time Owen Sound Attack Business Manager Ray McKelvie passed away on Thursday night following a battle with cancer. He was 87.

McKelvie helped bring the Guelph Platers franchise to Owen Sound in 1989 and served as a comptroller and minority owner with the Holody family, eventually taking on the responsibility of hockey operations as the club’s General Manager from 1994 to 2000. He sold his interests in the franchise in 2000, but has remained heavily involved with the club as its Business Manager for more than two decades.

“Ray McKelvie was a true gentleman and a key builder in the Ontario Hockey League,” said OHL Commissioner David Branch. “In addition to being a generous contributor to his community, his hard work, passion and vision was instrumental in OHL hockey finding a home in Owen Sound, resulting in an Attack franchise that continues to be a successful one to this day. Ray will be greatly missed.”

McKelvie received many accolades throughout his time in Owen Sound, though he was never a person who liked the limelight. In May 2013 he was honoured by the Ontario Hockey League, being named the Bill Long Award winner for Distinguished Service which is presented in recognition and appreciation of outstanding contributions to the OHL. Locally he was inducted into the Owen Sound Sports Hall of Fame as a builder in 1993.

While his business and hockey operations contribution to the success of the Plater/Attack organization is undeniable, it was his commitment to family and the community that those who were close to him would say was his biggest impact, extending well beyond the walls of the Harry Lumley Bayshore Community Centre. He, along with his late wife Georgina, were major contributors to many charitable and community organizations in the area. They were also huge supporters of youth sport and could be found any night in an arena or at a ball field taking in a game or at the track enjoying some horse racing.

“Ray McKelvie was a driving force behind the Platers and Attack for 33 years,” said Attack President and Member of Team Ownership Dr. Bob Severs. “His foresight and commitment to hockey in the Grey Bruce region led him to open the door to the Platers in 1989 and to help to facilitate the change in ownership in 2000 that kept the franchise in Owen Sound.”

“The area’s hockey fans owe Ray a debt of gratitude and his passing leaves an enormous space in the hockey world that will be hard to fill. We will miss him every day,” added Severs.

The Attack will honour Ray McKelvie prior to the start of their next home game on Saturday, December 10 against the Guelph Storm and throughout the remainder of the 2022-23 season with further details to come. The Attack will be providing members of the community the opportunity to submit condolences for Ray on their website. Condolences can be expressed by sending an email to admin@attackhockey.com and can be viewed at attackhockey.com.