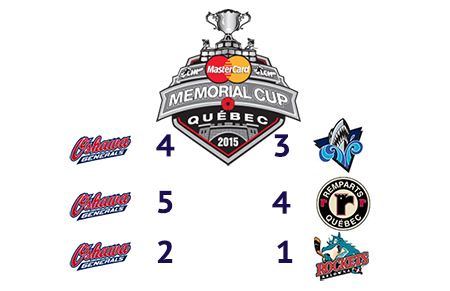 It’s been a successful week for the Generals so far at the 2015 MasterCard Memorial Cup. With three straight wins at the tournament, the Gens have punched their ticket to the final, which takes place on Sunday, May 31 at 7:00p.m.

They opened the tournament with a 4-3 win over the Rimouski Oceanic on Saturday, May 23. Tobias Lindberg, Michael Dal Colle, Stephen Desrocher and Hunter Smith were the goal-scorers in the first match up. The Generals outshot Rimouski 37-22, and were the more physical team through 60 minutes. Sunday night against the Quebec Remparts was a more nerve-wracking game compared to the first. Lindberg forced overtime with a power play goal with less than three minutes remaining. It was Desrocher who was the OT hero after putting on a show in front, with 1:53 remaining in the first 20 minutes of extra time. The Gens put 50 shots on net, while the Remparts managed 25, but Montreal Canadiens prospect Zach Fucale kept the game within one goal. Following their 5-4 win over Quebec, the Gens had a 2-0 record going into Tuesday’s game, therefore a win over the Kelowna Rockets guaranteed them a ticket to the final, and they did just that. It was another tight game, with a final score of 2-1. The Rockets had a 5 on 3 power play in the last five minutes of the game, which the Gens and Appleby were able to kill off. Lindberg and Cassels scored the two goals for Oshawa, which clinched them a spot in the finals on Sunday.

All three games have been tight but the Generals’ strong defensive game limits a lot of chances for opposing teams. However, Oshawa is not shy of offensive players either. Dal Colle sits third overall in the tournament for points, with five in just three games. Lindberg and Cassels are also in the top 10 list for scoring this tournament, with four points each.

The Generals’ opponent for Sunday is still to be determined. First, the Remparts and the Oceanic need to fight it out for a spot in the semi-finals to take on the Rockets. The winner of the semis will play the Gens on Sunday, beginning at 7:00p.m. Fans can catch the game on Sportsnet, listen live through our website, or follow along with us on Twitter. To purchase tickets to Sunday’s game at the Pepsi Colisée in Quebec, click here. 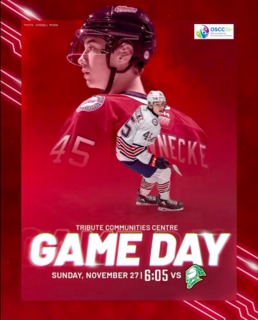 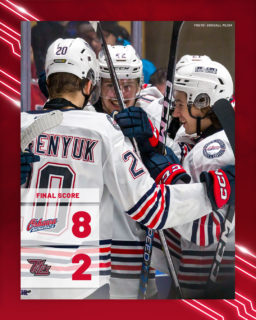 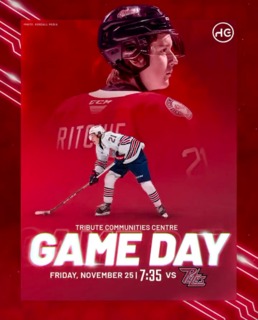 Revenge on the mind with Petes in town
3 days ago 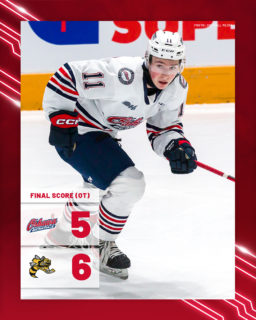