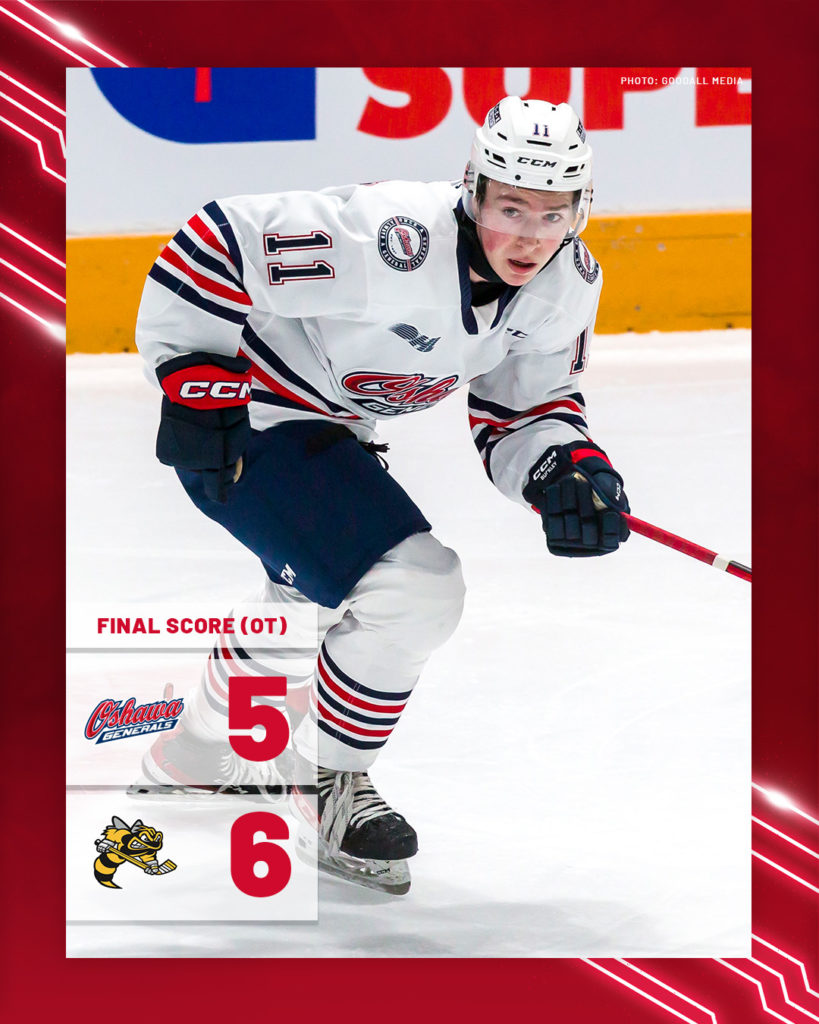 Oshawa, Ont., – It was the closest the Gens had come to two points since their 3-2 OT win over the Bulldogs on October 28th, but the Gens were unable to hold on and dropped their ninth loss in a row in extra time to the Sarnia Sting.

It couldn’t have been a better start out of the gate for the home side, as just six minutes into the game Oshawa already had a 2-0 lead. Captain Lleyton Moore scored his second of the season onlt two minutes in, followed by rookie phenom Beckett Sennecke’s sixth to double the goal total. Despite the early momentum, it was Sarnia who took control of the game, scoring two of their own to close out the second period.

The middle frame is where Sarnia had their good start. After  scoring two in a row to tie the game after 20 minutes, Sarnia opened the second period with two more unanswered goals, both within the first 10 minutes of the frame and both from Angus McDonnell. His third goal of the game completed the natural hattrick. Quick starts followed by a worse second period seems to be Oshawa’s kryptonite as of late, and had fans guessing it was another bad loss to extend the streak.

20 seconds into the third period, Bruins prospect Brett Harrison gave the Gens life with his 7th of the season. It was the first of three unanswered Oshawa goals from Harrison, Ryan Gagnier and Harrison again. Now just under two minutes from their first win in almost a month, the Gens were unable to hold on as the Sting tied the game late off the stick of Zach Filak, sending the game to overtime.

Oshawa started the extra frame down a man after Cameron Butler was called for a check-to-the-head penalty. As the call expired into the overtime period, Angus McDonnell scored his fourth of the game to send the Sting home with the extra point.

This was Oshawa’s first point since the OT win on October 28th, but still extended the season-high losing streak to nine.

The Generals next opportunity to get back into the win column is this Friday, November 25th against their arch rival Peterborough Petes, with puck drop scheduled for 7:35.