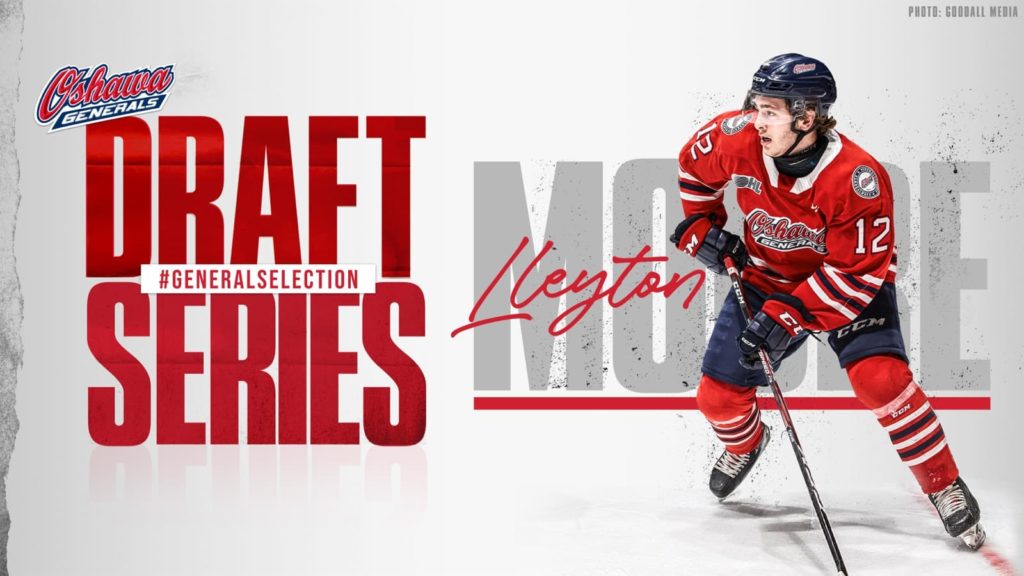 Oshawa, ON– Defenceman Lleyton Moore is keeping his training regiment interesting during this unique off-season as he prepares for the 2020 NHL Draft.

With an extended break, he has continued to improve his physical conditioning off the ice. In an interview with radio play-by-play announcer Callum Ng, he explains the fun and non-traditional way he has stayed in shape this summer.

“My mom decided to get a grocery cart and bring one back to our house and she wanted my sister to be in the cart while I was pushing it,” Moore says. “We would go around the block a couple of times just to get some cardio.”

Conventionally, Moore has been hitting the ice around six times a week. He says it is important for him to continue building his lower body strength.

Moore has also spent some of the off-season away from hockey. He says this has been a good way to give his mind a break but also to stay focused on the bigger picture. Moore has been working part-time with Two Men and a Truck Moving Company.

“Hockey is a big deal for me, obviously I train really hard for that but at the same time I have to work and realize how other people work,” Moore says.

Team General Manager and Vice President, Roger Hunt, says everything Moore has been doing can be seen through his on-ice product.

“Lleyton is one of the most dynamic young defencemen in the OHL. He was just hitting his stride as this season came to an end,” Hunt says. “He has a great stick defensively and his quickness is second to none to take away players’ time and space. He possesses offensive instincts that will make him that point-producing defenseman that every team covets. Lleyton is poised to have a breakout year this season.”

The 2020 NHL Draft takes place virtually on October 6 and 7.