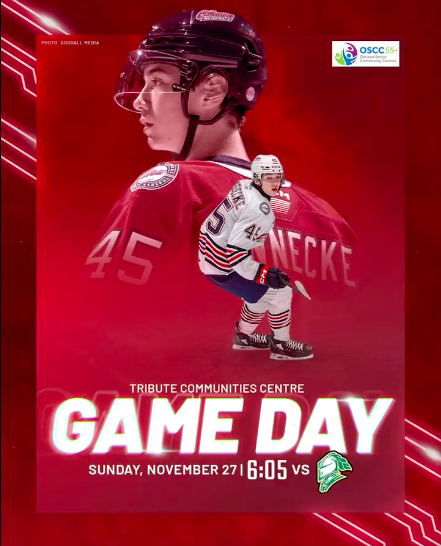 Oshawa, Ont., – With the team in good spirits, can Oshawa string two wins together for the first time since opening weekend of the season? In the last three games, Oshawa has begun to find their offence and will need to keep that going if they’re going to solve London’s Brett Brochu. This will be London’s first visit since the beginning of the 2019-2020 season and very few of those players remain on the respective rosters.

Oshawa enters the game riding the high of upsetting rival Peterborough Petes 8-2 on Friday night, ultimately stopping their longest losing streak of the decade at nine games. Lack of offense has been the story for the Generals so far this season, but now in their last three games have scored 15 goals, including the eight they put up on the Petes Friday night. London comes to Oshawa bouncing back from a slow start to their season, and have won eight of their last 10 games.

London is coming off a 4-0 shutout over their rival Kitchener Rangers, but both teams were off Saturday night.

Puck drop for this intra-conference matchup gets underway tonight at 6:05.

Ryan Gagnier: After a four-point effort on Friday night, overage forward Ryan Gagnier now leads the Generals in points with 19 points in 20 games. Gagnier is clicking in all zones of the ice, including two goals in the third period alone last night. With seven points in his last three games, the OA forward is leading the Generals offence clearly on the rise.

Patrick Leaver: One of the Generals who many have seen to be struggling this season, Patrick Leaver put in his season-best performance on Friday night, stopping 29/31 shots from the Petes. Not only did he only allow two goals, Leaver made countless 10-bell saves early in the game to keep Oshawa in the game, but also late in the game to keep the Gens foot on the pedal. It wont be surprising to see him rewarded with the start on Sunday night.

George Diaco: Since joining the Knights after being traded from the Bulldogs, Diaco has scored 23 points in 17 games, including nine goals and 14 assists. Part of the key to London bouncing back after a rough start was Diaco’s offence. Diaco is no stranger to playing the Generals, as a member of the 2021 Hamilton Bulldogs championship team, Diaco had eight points against the Generals.