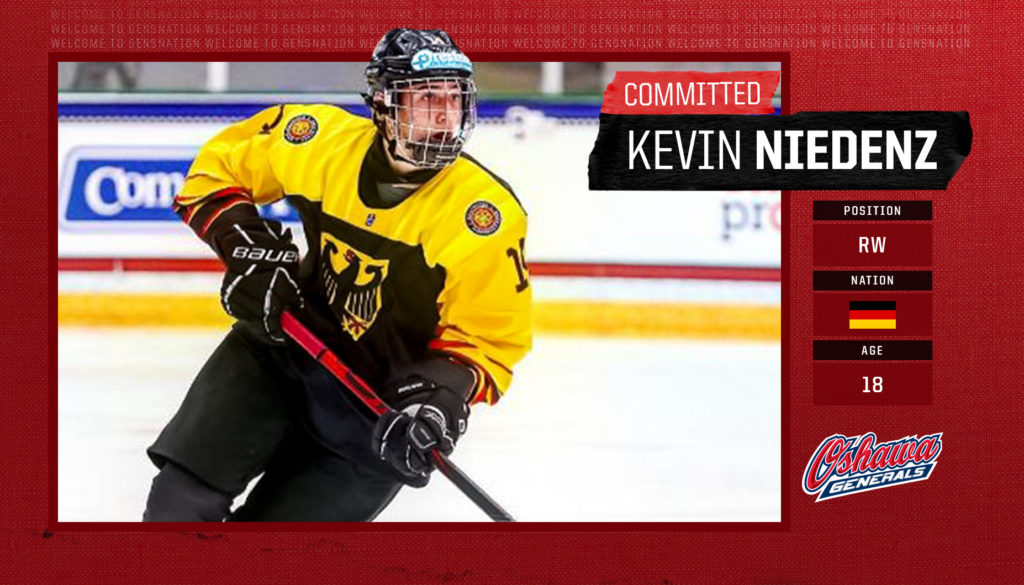 Oshawa, Ont. – For the first time since Sebastian Uvira in 2013, the Oshawa Generals will welcome a German import to their roster by way of Kevin Niedenz.

From Berlin, Germany, Niedenz was selected in the first round of the 2021 CHL Import Draft. The 6’1, 170 pounds forward has played at multiple levels in Germany, including a five-game call-up to the top men’s league – the DEL. He has also spent time in the DEL2.

Internationally, Niedenz has played for Germany at the IIHF U-18 Hockey Championship. In all contests with the U18 team, Niedenz played seven games, scoring two goals and two assists.

Niedenz also represented his country at the U17 championships during the 2019-2020 season, suiting up for four games, scoring two goals and four assists.

“Kevin will be a welcomed addition to this year’s roster. He plays a very responsible game,” says Roger Hunt. “He spent time playing games in the DEL which is one of the best men’s leagues in Europe last season while being a regular in the DEL2.”

“This starts a new and exciting chapter of my life, which I have waited a long time for and worked very hard for,” says Niedenz. “I want to thank everyone who has helped me up to this point and I am happy to be a part of this organization. I can’t wait to see the fans in action. Let’s go Generals!”

Your first chance to see Niedenz in game action will be at our first home exhibition game at the Tribute Communities Centre on Sunday, September 5 at 6:05 p.m. Ticket information will be provided in the near future.