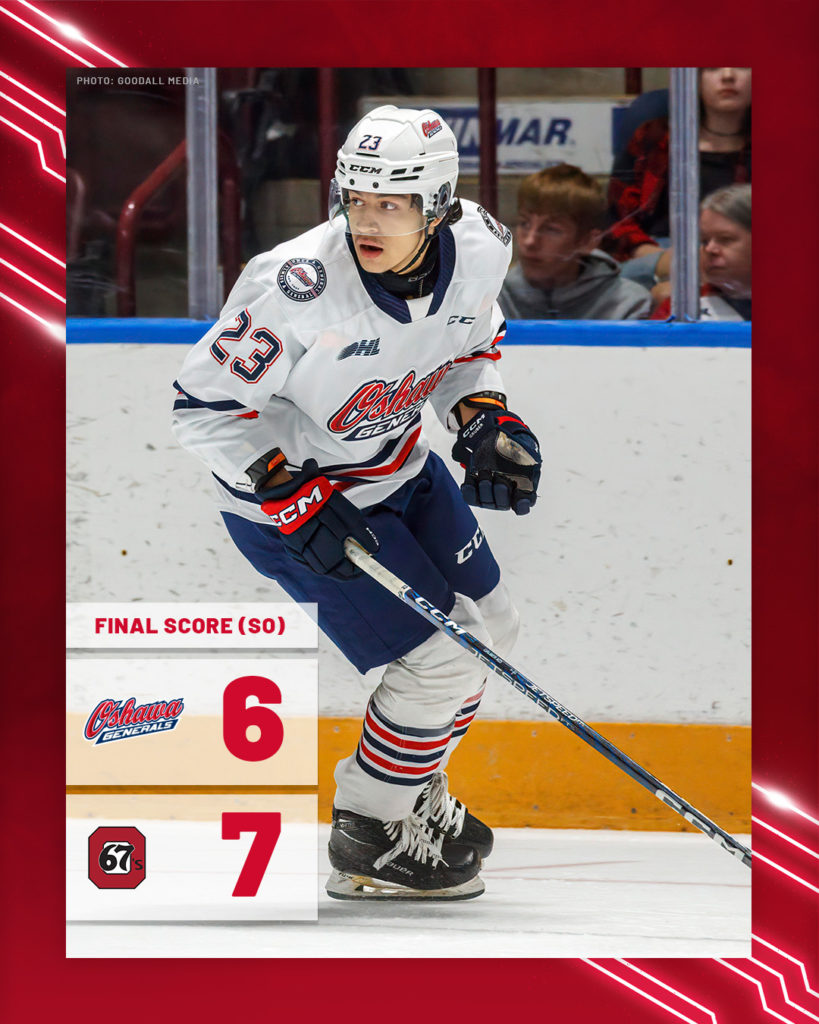 Oshawa, Ont., – It was the first game back at the Tribute Communities Centre since May 1st, and GensNation entered the building hoping for a repeat of the night before. The Gens entered the Friday night contest on a high, defeating the Barrie Colts just 24 hours before, 2-1.

The momentum felt right at puck drop, with the Generals flying out of the gate and into a 1-0 lead just one minute into the game. Overage forward Ryan Gagnier threw a wrister on net that 67’s goaltender Max Donosos got a piece of, but still trickled through for the first goal of the game.

Barely more than a minute later, the Generals would add to their lead of the stick of Calum Ritchie’s first of the season.

After the Generals took a penalty, the momentum flipped entirely the way of the 67’s. First, Ottawa capitalized on the first period power play of the stick of Luca Pinelli. In the next eight minutes of play, Ottawa would add two more goals to their total, one from Cameron Tolnai and a second from Pinelli. The early 2-0 Gens lead had disappeared and turned into a 3-2 lead for the 67’s.

Knowing they did not want to go into the dressing room down one after a hot start, the Generals would answer off a rush led by defenceman Nikita Parfenyuk, who hustled past the Ottawa blueline to finish for his first of the season.

The back-and-forth play continued in the 2nd period, starting with another 67’s goal from Pinelli to complete the hattrick. Oshawa would answer once again thanks to a clean play off the boards and into the net from overage forward Cameron Butler, also scoring his first of the season.

Ottawa would take the lead into the 3rd period though after a Jack Matier power play goal made it 5-4 for Ottawa.

The third period saw three more goals scored in just a 3:11 span, two the way of the Generals and one for the 67’s. After Ottawa took a penalty midway through the period, Stuart Rolofs got his scoring campaign started off a laser from the faceoff dot, beating Donoso clean to tie the game at 5-5. On a broken play finished by Brad Gardiner, Ottawa would retake the lead 6-5 just over a minute later. Only seconds after Ottawa took a 6-5 lead, newly appointed alternate captain Thomas Stewart did his best Nikita Parfenyuk impression and led a breakaway rush of his own, tying the game at 6-6.

The Generals were unable to register a shot in the overtime period but Patrick Leaver did everything he could to extend the game one more step – the shootout.

Ottawa would only need two shooters to finish the game, after Max Donoso stopped all three Generals attempts. Vinzenz Rohrer ended the game in Ottawa’s favour.

Despite the loss, the Generals earned another point early in the season, securing 3/4 points in the season opening back-to-back. The Oshawa Generals will end the OHL’s opening weekend with a classic Sunday night hometown affair with the Kingston Frontenacs at the Tribute Communities Centre on October 2nd, with puck drop scheduled for 6:05. Click here to purchase your tickets.