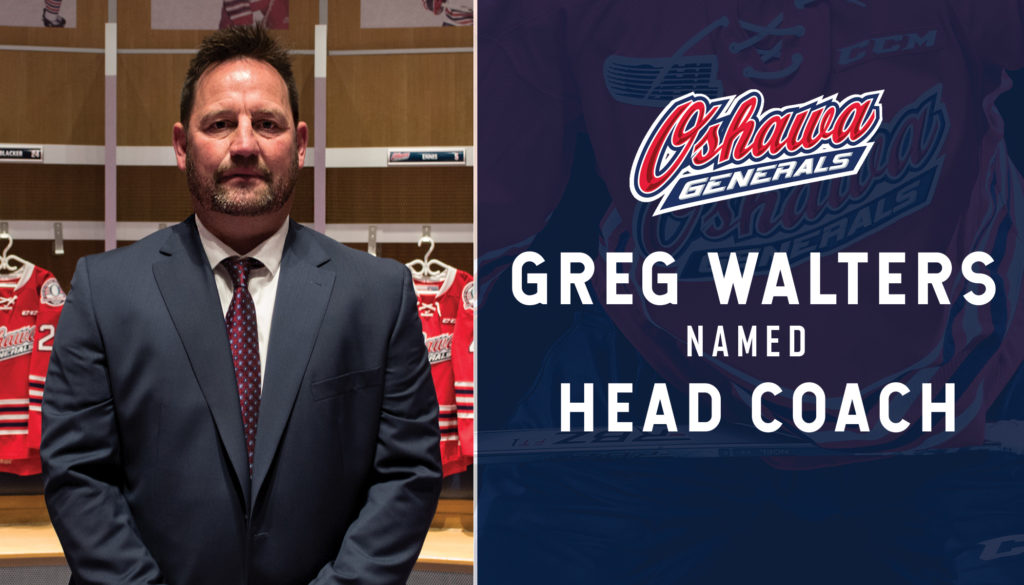 OSHAWA,ON–The Oshawa Generals announced this morning that Greg Walters has been named head coach of the team.

Walters served as the Head Coach of the Georgetown Raiders of the Ontario Junior Hockey League for the past 8 years, leading the team to its first league title in 2017 and being named the league coach of the year for the second time. He continued his winning ways being named the Canadian Junior Hockey League coach of the year the same season, a vote determined through 10 leagues comprised of 132 teams. This past season, he again led the team to the OJHL finals. Of the 423 Georgetown regular season games during his tenure, he led the team to victory a notable 292 times.

Spending his junior career in the Ontario Hockey League with Ottawa 67’s, Walters was drafted in the fourth round, 80th overall in the 1990 NHL Entry Draft to the Toronto Maple Leafs. After a lengthy pro playing career in various North American leagues, Walters took an assistant coaching position with the Sarnia Sting, a position he remained for eight years before joining Georgetown.

“This is truly an honour to be named the new head coach of this team. I am grateful and very excited to be joining such a historic franchise such as the Oshawa Generals” said Walters upon receiving the news he would be the Gens new bench boss. “I’m looking forward to the upcoming season and getting things started here with this city, team and fans. I can’t wait to meet the players and start the process of bringing another Championship back to Oshawa.”

Walters joins the likes of many successful coaches who have come through the Generals dressing room such as Paul Theriault, Stan Butler, George Burnett and D.J. Smith.

“After an extensive search we came to the conclusion Greg Walters is the best suited candidate to lead our organization and our players” said Roger Hunt, Vice President and General Manager. “He has a real knowledge of our league as player and a coach. He has spent the last number of years as the head coach of the Georgetown Raider of the OJHL, all the while honing his skills. Greg will be tough yet fair with our players and wants to win just a much as we all do.”

As the summer progresses, Walters will get to know his new team as he gets prepared for his first training camp and team’s exhibition games in early September.

2018/19 Season Tickets are on sale now! Be there every step of the way as this year’s team drives for an OHL title and beyond. Don’t miss a minute of the action in the comforts of the state-of-the-art Tribute Communities Centre. It’s great hockey, at a great venue, with great value. Oshawa Generals season tickets – sit back, relax and witness history. Ticket information–click here!

OHL Mourns the Loss of Bob Kilger
56 mins ago