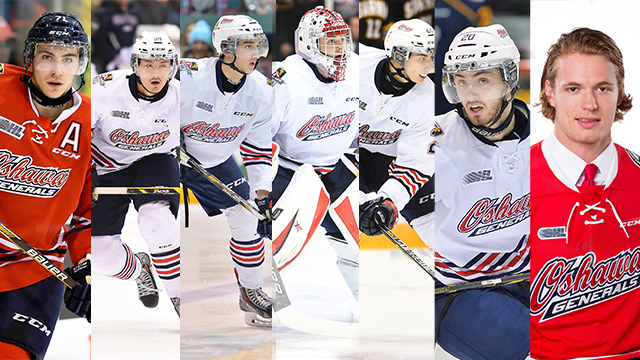 Let’s start with Dal Colle and Vande Sompel, who both head to Brooklyn for the New York Islanders training camp. The Islanders have a recent history of drafting Generals from Tavares to de Haan.

Dal Colle was drafted fifth overall in 2014 to the Islanders and will be attending his second camp. Dal Colle collected 42 goals and 51 assists for 93 points in 56 games for the Oshawa Generals last season.

Mitchell Vande Sompel was selected in the 3rd round, 82nd overall in the 2015 June NHL entry draft by the New York Islanders. The London Ontario native was in his second season as a General last year and collected 12 goals and 51 assists for 63 points in 58 games. He is an integral part of the Generals blue line.

Next up the recently drafted defenceman Stephen Desrocher. Stephen was selected 155 overall by the Toronto Maple Leafs in the 2015 NHL entry draft. The 6’4” d-man came alive during last year’s playoff run recording 12 points in only 33 games. Stephen will take part of the Maple Leafs rookie camp in London, Ontario this year.

Free Agent and starting goaltender Ken Appleby has been invited to New Jersey’s Rookie Camp. The fan favorite goalie put together a brilliant season last year with a 2.08 GAA and a .924 save percentage. Looking to make an impression Appleby will be given a chance in New Jersey.

With the Memorial Cup winning goal already on his resume, Anthony Cirelli made his first year with the Generals count. He collected 13 goals and 23 assists for 36 points in 68 games last year. This earned him a draft selection from the Tampa Bay Lightning in the third round, 72nd overall. Cirelli will join the Lighting for their rookie camp.

Matt Mistele joined the Oshawa Generals half way through last season, scoring at a torrent pace he added another punch to the Generals lineup. The Whitby, Ontario native was originally selected by the Los Angeles Kings in the 6th round 180th overall in the 2014 NHL entry draft. Mistele will join the Kings for their rookie camp this weekend.

One of the newest Generals, CHL import draft pick Lukas Lofquist, will go to the Florida Panthers rookie camp as a Free Agent. The OHL rookie has already started to impress fans of the Oshawa Generals he will now try to impress the fans in the sunshine state.