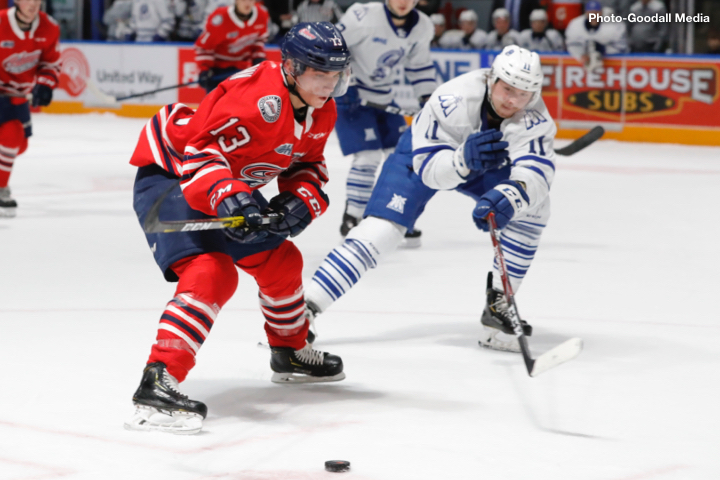 OSHAWA, ON – Mississauga comes to town for their final match against the Gens for the season. Your Generals were seeking vengeance after their last matchup which saw them lose 7-4 in a hard fought loss to the Heads. Every game between these teams this season has been won by the away team, your Generals looked to break that trend tonight.

The first team to tickle the twine was the Steelheads. Team leading goal scorer James Hardie  put the first one past Kooy, followed by a goal from rookie Chas Sharpe, who launched his first of his OHL career.

The game got physical starting with a tussle between Generals recent addition Ryan Stepien and Steelheads’ Nicholas Canade, to which they were both assessed roughing minor penalties.

Brett Neumann bested Edmonds on a shot assisted by the Generals top defensive pairing – Nico Gross and William Ennis. The goal was his 31st of the season and moved him into a tie for the OHL league lead in goals.

The physicality continued into the second with a Ty Tullio hit on a Steelheads forward to which defenseman Duncan Penman didn’t take too kindly to. Penman’s gloves flew through the air, as did Tullio’s. This was not a fight where both players were just going through the motions. They were swinging so fast at each other it was like the wings of a hummingbird. Tullio came out on top in the end.

A Generals’ powerplay had the boys in red set up in the Steelheads zone. A Giovanni Vallati east-west pass to Brett Neumann saw some promise. Neumann bobbled the reception, stopping it with his skate, then scrambled to get a shot off. He beat Edmonds with the shot, and in doing so passed Arthur Kaliyev to take over the league lead in goals scored.

Heads’ Ty Collins took a spinning shot from the slot with just under a minute remaining that was a very near-miss. The period ended even at twos with your Generals outshooting 26-19.

Collins would gain redemption for his near miss potting his ninth of the season. The goal came only 1:46 into the period and was assisted by Calvin Martin.

A beautiful tic-tac-toe play from MacLean to Harrison to McShane was halted by the side of the net on a shot that almost everyone in the grandstands thought was destined to cross the goal line. That line would continue to have strong play, holding possession in the Mississauga zone.

Although the Gennies pushed hard to even the game throughout the period they were unablee to get it done. Hardie’s second goal of the game into an empty net would seal the game for the Heads. Your Generals outshot 34-29.

The next Generals home game is Sunday, January 19, 2020 as they face off against the Ottawa 67s.