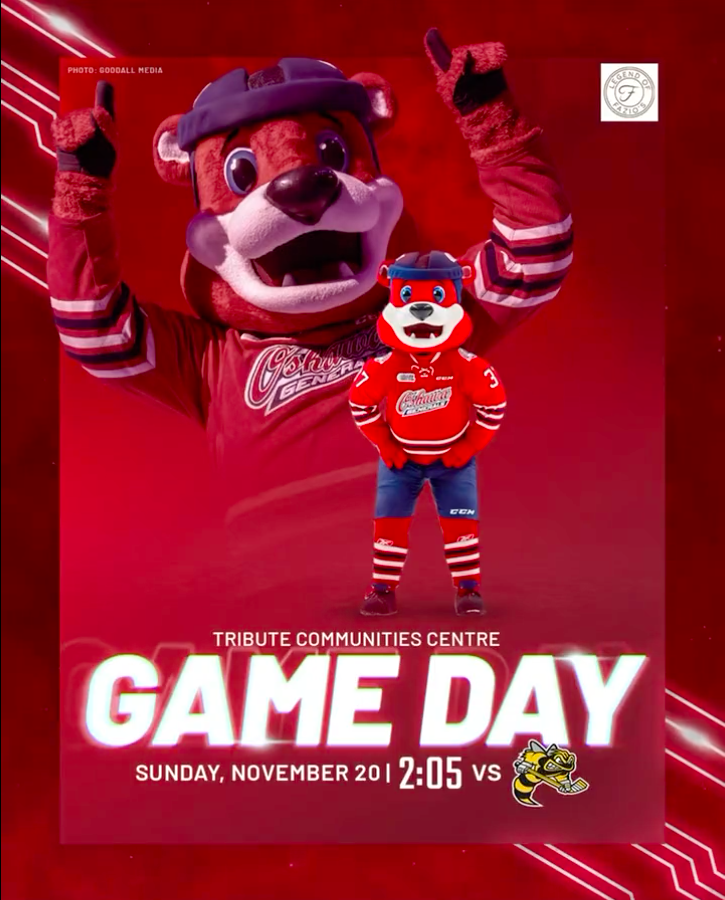 Oshawa, Ont., – With a lot of positives to build on from Friday night, the Generals close out their weekend on Deke’s 15th birthday against the visiting Sarnia Sting! With both teams headed in different directions in the standings, it won’t get any easier for Oshawa, who are searching to somehow snap their current eight game losing streak. The Generals, 9th in the Eastern Conference and 19th in the OHL, will need to get through the 5th place Sarnia Sting who recently bolstered their scoring touch with the addition of former Guelph Storm scoring leader and Anaheim Ducks prospect Sasha Pastujov.

Scoring goals hasn’t been a problem for the Sting, who also feature the OHL’s leading scorer and Toronto Maple Leafs draft pick Ty Voit. Voit has scored an impressive 32 points in just 20 games.

Oshawa enters the game fresh off a 3-2 heartbreaking loss to the Owen Sound Attack, where it wasn’t until the final four minutes that a team was able to take a lead that they could hold onto.

This afternoon’s game features more than just hockey, as everyone’s favourite mascot turns 15 years old! That’s right, this afternoon will feature Deke’s Birthday Bash with some of his closest friends, and the first annual edition of Mascot Musical Chairs during the 2nd intermission. To help you celebrate, there will also be FREE popcorn while supplies last, throughout the entire arena!

Doors open at 1:05 and tickets have been moving fast, so don’t hesitate to grab yours and join the party. Puck drop is set for 2:05 p.m.

It has been more than three years since these two teams last met due to the COVID-19 pandemic. Matter of fact, this will be Sarnia’s first visit to the Tribute Communities Centre since October 18th, 2019, when the Sting handed the Generals their then first loss of the 2019-2020 season, snapping Oshawa’s nine-game winning streak.

Cameron Butler: Expected to return to the lineup following a 2-game suspension for slew footing, assessed after the game on November 13th, Butler will be rejoining a Generals forward corps who have struggled to score goals. Butler, amongst the team leaders in every offensive category will be looked upon in his return, not only for his ability to put the puck in the net, but for his physical presence in all three zones of play.

Lleyton Moore: The Generals captain was everywhere on the ice for the team Friday night vs. Owen Sound. Whether it was quarterbacking the more than five powerplays, blocking shots on the penalty kill, or being the first body in on the forecheck, there wasn’t much Moore couldn’t do. If Oshawa is going to snap this skid, it will be the OA captain leading the way to make that happen. In 18 games this season, Moore has scored one goal and added 12 assists.

Cooper Way: The former General will make his first visit back to Oshawa since being traded earlier this season. The 19-year-old forward has been with the Sting for 12 games now and has scored two goals and three assists with the Bees. In his first seven games with the Generals this season he didn’t score a single point. Has the new environment been the difference for Way? One might think he’ll be looking extra hard for a goal this Sunday afternoon.