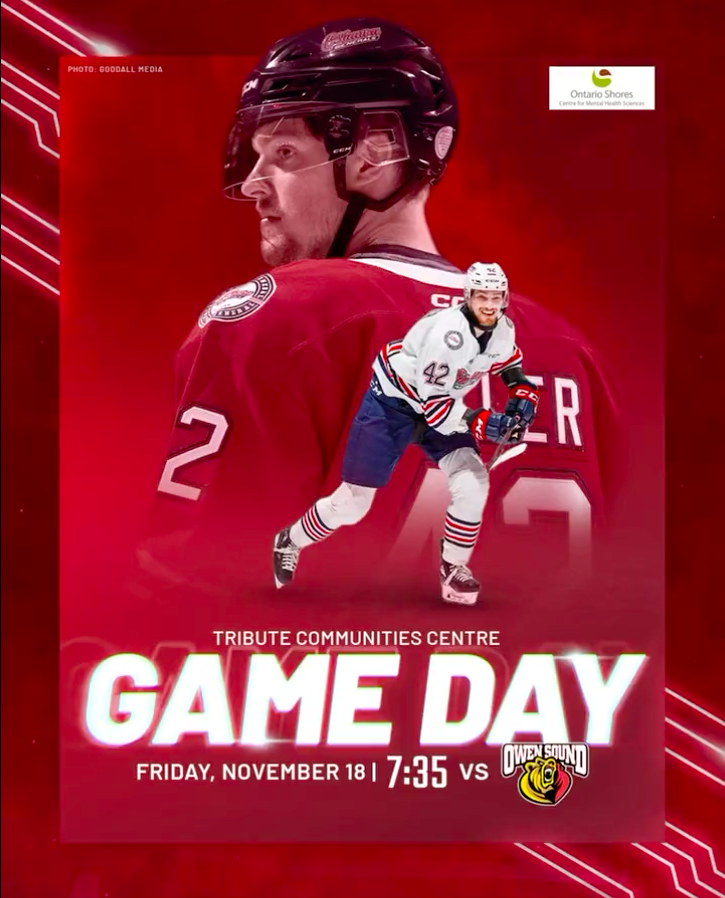 Oshawa, Ont., – For the first time since February 17th, 2020, the Oshawa Generals will play host to the Owen Sound Attack at the Tribute Communities Centre. The last time the Attack were in town, Phil Tomasino had recently been acquired by the Gens, and ‘Only the Young’ was the top Billboard song. Now, Tomasino is playing with the Nashville Predators, and the Generals are being led offensively by Cameron Butler, Stuart Rolofs and Calum Ritchie.

Oshawa enters this game on a season-long seven-game losing streak, dropping their game last night to rival Petes 4-0. It was the third time this season the Generals have failed to score a goal. The Gens have now fallen to a 2-7-0-1 record in their last 10 games. Owen Sound visits Oshawa on a much different trajectory, currently sitting at 12-6 on their season, good enough for 1st in the midwest division. Owen Sound won their last game by doubling up the Erie Otters by a score of 6-3.

The schedule isn’t going to get any easier for the Generals, but if they are going to snap their losing streak, looking behind them or ahead of them isn’t going to do it. With tonight on mind, the puck drops at 7:35 at the Tribute Communities Centre.

As mentioned before, it has been almost three years since these two teams met, and both looked very different. It was Oshawa who came away with a 4-3 overtime victory at the TCC, thanks to a thrilling game-winning goal from Brett Neumann. The Gens came back in the game, at one time trailing both 2-0 and 3-2 in the game. Goals from current Gens Ryan Gagnier and Lleyton Moore, plus now alumni Allan McShane were able to send the game to extra time. All three goalscorers for the Attack that night have since graduated from the OHL.

Beckett Sennecke: Recently returning from his stint with Hockey Canada at the World U-17 Hockey Challenge, the 16-year-old has been a driving force of the Generals’ offense this season. The struggling offense should be excited to see Sennecke return to the lineup as in his first 13 games in the OHL, he has been able to produce just below a point-per-game pace by way of five goals and five assists. Look for Sennecke to bring the Oshawa crowd to their feet in his return to the Tribute Communities Centre.

David Bedkowski: Also making his return from the World U-17 Hockey Challenge, Bedkowski had one of his best games in an Oshawa Generals jersey on Thursday night in Peterborough. Due to a shortened offensive bench, Bedkowski saw himself playing forward for the game, and ultimately made the best of it. One more than one occasion, the defender turned forward was able to drive to the net, beating numerous Petes defenders on his way through. Early in the game, Bedkowsi had at least two of the Generals first five shots of the game.

Deni Goure: It’s easy to look at the Attack roster and see who you should be looking over your shoulder for – because this team can score. Owen Sound is led by 2003-born forward Deni Goure with a staggering 26 points in just 18 games. Goure, playing in his third year with the Attack, has 12 goals and 14 assists for his 26 points. His 12th goal already makes him halfway towards a career-best in fifty fewer games. Don’t be shocked to hear his name over the speakers tonight in Owen Sound’s only visit.