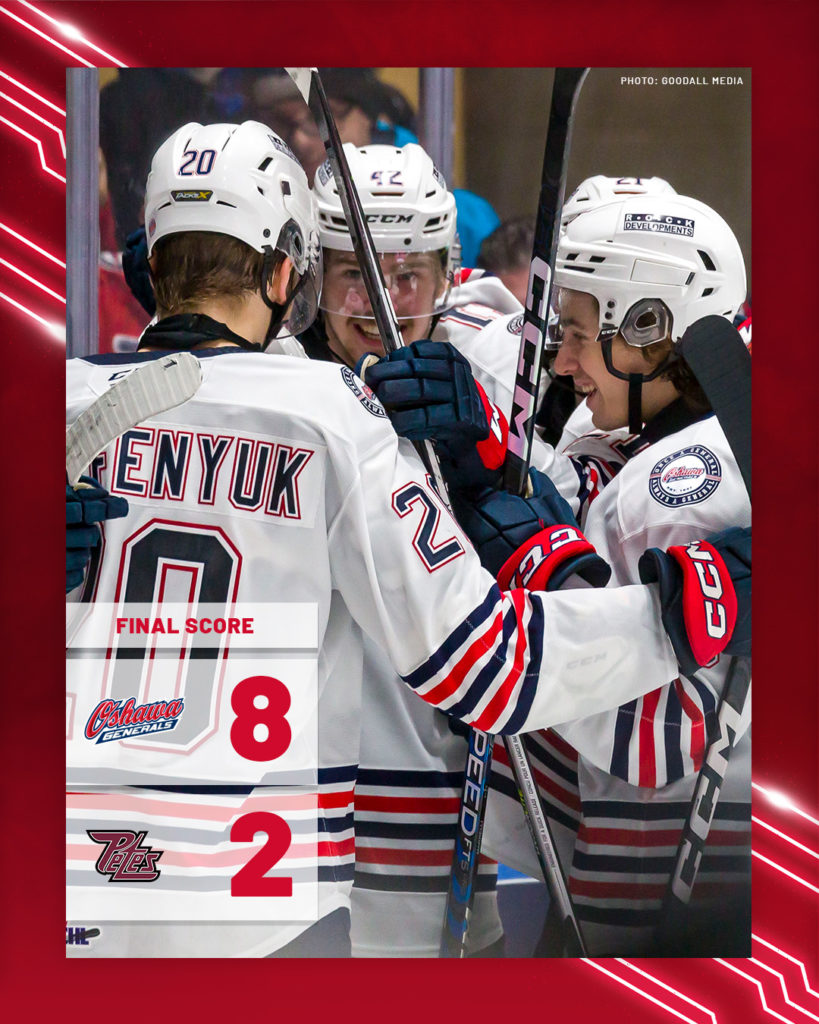 Oshawa, Ont., – If the Generals were waiting to put on a show before ending the nine-game losing streak, it was definitely worth the wait.

Coming in once again as underdogs to their rival Peterborough Petes, the Generals scored six unanswered goals to dominate the Petes en route to a thrilling, and much needed, 8-2 win over the Petes.

The first period started in the perfect way for the home side, when Thomas Stewart scored on a bloop wrister upon entry to the Petes zone. Making the start for the Petes, the first goal was one Liam Sztuska would have definitely wanted back. Within a minute of taking a 1-0 lead, the Gens would get caught playing with the puck in their own zone, leading to a quick tying goal from the maroon and white. The Generals hard work in the first period wouldn’t go without a reward, as Bruins prospect Brett Harrison would find the net once again off a bullet of a one-timer, giving the Gens a 2-1 lead heading into the first intermission. Harrison has now scored three goals in his last two games.

The second period began with momentum going to Peterborough, tying the game once again on a powerplay thanks to Chase Stillman. What now was beginning to look like a missed opportunity for Oshawa to hold a lead, began turning into what nobody expected it to. With less than two minutes remaining in the second period, the Gens would take their third lead of the hockey game thanks to Cameron Butler.

They wouldn’t look back this time.

The third and final period was ALL Oshawa, scoring another five times on their rival. It was almost as if everytime they entered Peterborough’s zone, they were rewarded with a goal. With the offence flowing, Ryan Gagnier and Calum Ritchie would both score twice in the final frame, and Kimo Gruber would add his first OHL goal to make it 8-2. With his four point effort (two goals and two assists), overage forward Ryan Gagnier now leads the team in points with 19 in 20 games.

Patrick Leaver earned the start for Oshawa and turned in one of his best performances of the season, turning away 29 of Peterborough’s 31 attempts on goal.

Oshawa thrilled their season high crowd of 5,673 with surely their best games of the season. They’ll hit the ice once again on Sunday night when they host the visiting London Knights for the first time since November of 2019. Puck drop is scheduled for 6:05 at the Tribute Communities Centre.