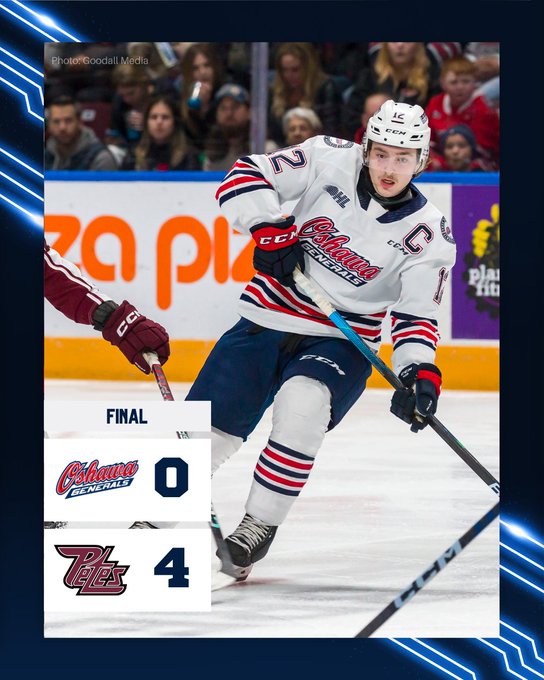 Oshawa, Ont., – It was another night to forget for the Generals, losing their second game of the season to the Petes by a score of 4-0.

On home ice, the Petes came out FLYING, opening the scoring just over five minutes into the game. It was Oshawa’s first visit to the PMC this season, and it definitely didn’t get off to the start they were hoping for. The bad luck continued throughout the opening twenty minutes, as the Petes would score twice in one minute to make it a 3-0 Petes lead. By the end of the first period, Oshawa wasn’t able to get much of anyting going, being outshot by the Petes 22-3.

Oshawa came out a bit stronger in the middle frame, hitting anything that moved in maroon and white. The physical play seemed to work in favour of the Generals, as it kept Peterborough to the outside an severely decreased their scoring opportunities. The downside? Oshawa still wasn’t able to make many of their own. With just four minutes remaining in the second period the newest Pete, Brennan Othmann, would make it 4-0 for the home side. Peterborough outshot the Generals once again and led on the shot clock 39-13.

The third period saw the Oshawa Generals turn it up once again, hemming the Petes into their own zone to start the period. Peterborough found themselves in penalty trouble in a big way, first taking a 5 minute major for checking to the head, and almost immediately taking an interference penalty. With a full two minutes of 5-on-3, Oshawa continued to press, throwing anything they could onto the Peterborough net. All in all, they still couldn’t solve now the league leader in save percentage, goals-against average and shutouts, Michael Simpson.

The Gens outshot the Petes 13-10 in the final frame but Simpson stopped every one of them for his second shutout of the season.

Peterborough swept the three stars and handed Oshawa their 7th-straight loss, with their last win coming on October 28th against the Hamilton Bulldogs. Oshawa’s next chance to snap the streak is tomorrow night when they host the Owen Sound Attack at 7:35.