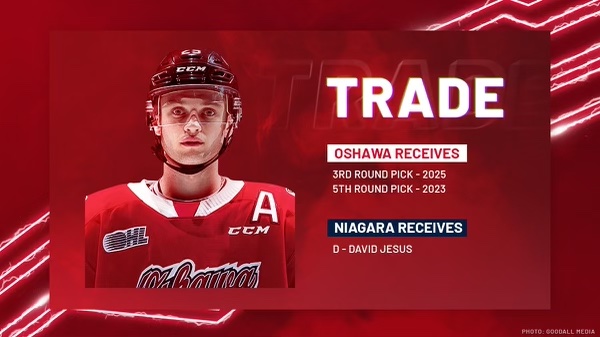 Oshawa, Ont., – On Thursday afternoon, the Oshawa Generals announce they have traded defencemen David Jesus to the Niagara IceDogs in exchange for a 3rd round pick in 2025 and a 5th round pick in 2023.

Jesus was drafted by the Generals in the 12th round of the 2018 OHL Priority Selection and has been a staple on the blueline ever since. Appearing in 125 games as a General, Jesus tallied six goals and 27 assists for 33 points.

During his time as a General, he earned an invite from the Arizona Coyotes to join their rookie camp in 2021. Jesus also made his pro-hockey debut during the 2020-2021 season joining Liptovsky Mikulas of the Slovak Extraliga.

Jesus was also a big part of the #GensNation community.  Awarded an assistant captaincy for the 2021-2022 season, he used his leadership skills both on and off the ice. Whether it was participating in the Future Generals Camp as a coach, or visiting staff when they needed it most, you could always count on him.