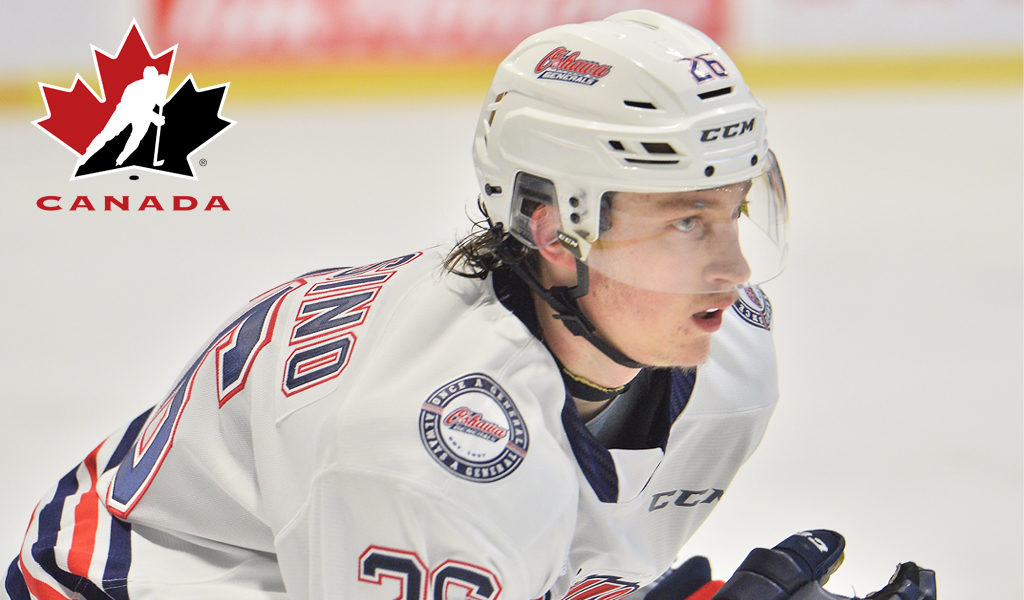 If there’s any advice Philip Tomasino is banking on while he gears up for puck drop at the World Juniors, it’s the simple words of three-time Team Canada participant Ryan Ellis: “Play your game and be confident in yourself.”

It’s advice he picked on over the summer while living with the defenceman during Nashville Predators’ camp in the midst of quite an accomplished year for the Oshawa Generals standout, and advice he’s hoping will pay off as he looks to help Canada defend gold on home soil.

With a 100-point season in the books, the 6-foot centreman turned heads over the 2019-20 campaign as a dependable offensive threat; good for faceoffs, good for finishing plays, and good for putting pucks in the net. Now he’s looking to bring his expertise to the international stage, living out a childhood dream.

“I’ve always dreamed of this since I was a little kid so I think anytime you get the chance to represent your country it’s an unbelievable feeling,” said Tomasino.

Looking back to the trade that sent him to Oshawa almost a year ago, the 19-year-old Mississauga native credited the Generals’ staff with helping him improve his game in preparation for the next steps in his career.

“I continued to work on my defensive game; that definitely improved over the second half of the year last year. That was kind of the biggest thing for me and now just becoming an overall player is something I really want to work on,” the 2019 first round pick continued. “Obviously when you get to play with the pro guys, they’re so good all over the ice so that was a big step for me to take and I think I definitely improved on that a lot.”

Lining up alongside fellow stars that include Quinton Byfield and Connor Zary during the week’s final practices, he acknowledged speed, skill and versatility as contributors to his teammates’ dominance.

“Byfield’s a pretty big guy and he’s pretty fast and obviously Zary’s a fast, skilled player as well. We’re all fast players, and if we use our speed and our size to our advantage, I think we’ll be a pretty good line. We have four deep lines so I think we’re definitely going to be a tough line and I’m looking forward to playing with those guys for sure,” he said.

“I think we’re going to stick to our games for sure. I think everyone in that sense wants to retrieve pucks and get pucks but at the same time we have the ability to put pucks in the back of the net so I think we’re just going to play our games.”

Upon getting the opportunity to skate with him over the past month, Chicago Blackhawks forward Kirby Dach spoke highly of Tomasino’s presence on and off the ice.

“Phil’s obviously a super smart player, he knows where to put pucks, he’s fast as well. I think speed like that, it always helps and he has a ton of skill. Obviously Nashville sees something in him. He’ll be a great pro,” said Dach. “He’s fun to be around in the dressing room too, he’s always trying to talk with guys and learn and that’s a big thing. He’s got a lot of confidence and when you’re playing with confidence it really helps you out, not only individually, but as a line.”

That confidence is something that grew exponentially during his front row seat to the NHL lifestyle and time spent rooming with Ellis, who he says he learned a lot from in preparation for his World Juniors debut.

“We talked about it a few times, he’s played in this tournament three times so he’s a great mentor for that. I learned a ton from him; just off-ice habits, just seeing how hard he works. Obviously when you get the chance to represent your country you’re going to go all out so I think getting the chance to talk to him about his experiences here definitely taught me a lot and it’s been a great learning experience for myself.”

And while he emerged from his NHL stint a much more confident player, he’s expecting a mix of excitement and nerves upon hitting the ice in Edmonton with the maple leaf on his chest.

“I’m definitely going to be excited come the first game, and I think I’ll definitely be a little nervous but I’m looking forward to that feeling.”

OHL Mourns the Loss of Bob Kilger
49 mins ago