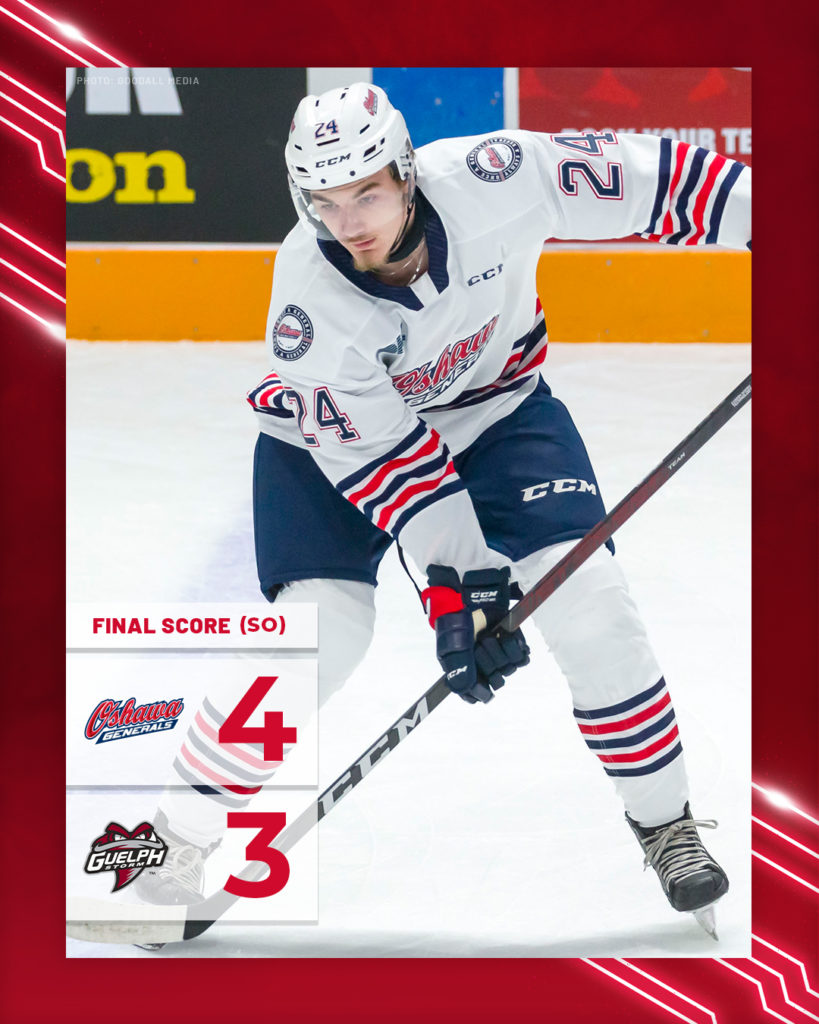 Oshawa, Ont., – In front of a sold out crowd at the Garnet B. Rickard Recreation Complex in Bowmanville, the Oshawa Generals won a thriller over the Guelph Storm 4-3 in the shootout.

For two teams that haven’t seen each other since 2019, the game had the energy of a playoff series. Hard hits, scrums after every whistle, and even some fights were the story of last night’s exhibition game.

The Generals wasted no time getting the Clarington crowd on their feet when just four minutes in Cameron Butler scored his second of the preseason on a nice passing play from Beckett Sennecke and Ryan Gagnier.

The hot start didn’t stop the Storm from getting right back into the game. Less than two minutes after Butler’s opening goal, Matthew Poitras evened the score with his third of exhibition play. Guelph would score another just three minutes later giving them the 2-1 lead heading into the first intermission.

Period number two started the same way as the opening frame for the Generals – with a goal. Nikita Parfenyuk threw a laser of a shot towards net and beat the Storm’s Jacob Oster clean to tie the game. 63 seconds later Ryan Gagnier would score his first of the preseason to give Oshawa the 3-2 lead. The lead held for most over the middle frame but Guelph tied the game once again thanks to Valentin Zhugin’s second of the game.

Tied 3-3- heading into the third period, both teams fell into penalty troubles in the final 20 minutes, with both teams receiving game misconducts for fighting. Despite numerous powerplay opportunities, no team was able to break the deadlock.

Per OHL preseason policy, this game was settled via a shootout. Oshawa’s Beckett Sennecke scored a highlight reel goal to open the shootout, while Lleyton Moore scored in the fourth round to seal the game for the Generals. Carter Bickle stopped 3/4 in the shootout and 27/30 over the entire game.

The Generals’ next exhibition game takes place at the TCC on Saturday, September 24th at 7:05! Tickets are available at the TCC box office for just $12!