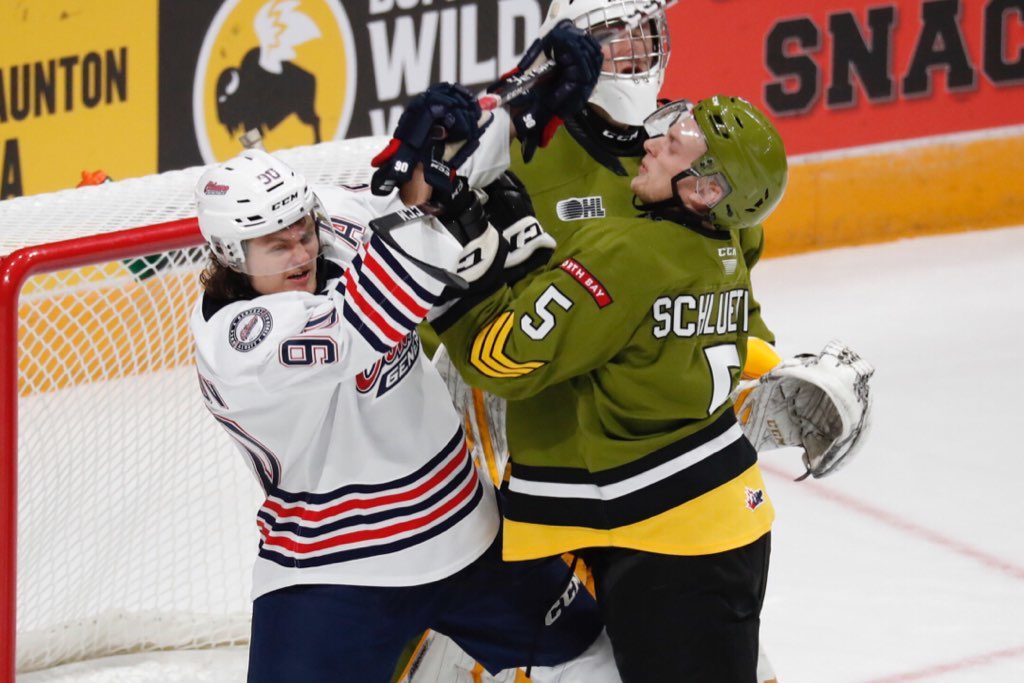 OSHAWA, ON – The North Bay Battalion were storming the gates of the Tribute Communities Centre in an attempt to end the perfect 4-0 start to the season for the Oshawa Generals. The Battalion are looking to bounce back from a dismal 1-4 start to the season. This was the first time these teams are matching up this season.

The Generals started off the period strong on offense – garnering 5 shots in the first 2 minutes of play. The early chances were highlighted by a Brett Neumann breakaway turned aside by Battalion netminder, Joe Vrbetic. The Generals second big chance of the evening came on a karim off of the net from an Oliver Suni shot, which was retrieved by Allan McShane who fired at an open net, but was stopped by the stick of Vrbetic. A Brandon Coe hit from behind on Generals Danil Antropov would put the Generals on their first powerplay of the game. The Generals had a tough time breaking into the zone, but eventually overpowered the Battalion penalty kill and got set up in the offensive zone. Just as the powerplay was expiring, Oliver Suni sent a pass from behind the Battalion net to the faceoff dot where defenseman Nico Gross was waiting. Gross, took his time teeing up a slapshot which he rifled past Vrbetic on the top shelf. Exactly 1 minute later, Ty Tullio received a stretch pass from Giovanni Vallati which sent him in on a breakaway deked around Vrbetic beating him with a slick backhand. The period would end 2-0 Generals, with the Generals heavily outshooting the Battalion 17-8.

The Generals started the period on the penalty after a hooking call against Vallati carried across the intermission. The Generals killed the penalty, spending most of the kill in the Battalion end. At 5:08, Battalion defenseman Brandon Henderson earned a slashing penalty. On the ensuing Generals powerplay, the Battalion dumped the puck up to captain Brad Chenier, who came in with Luke Moncada against one General defender. Chenier passed from the wing to Moncada in the slot who deked past a sprawling Andrew MacLean to bring the score to 2-1. Chances were exchanged throughout the midsection of the period with neither team taking full control of the game. Highlights included a break in from Chenier which was thwarted by a strong backcheck by a Generals defender and a great shot on a break in for the Generals forward Daniel Walker, who played for the Battalion last season. A boarding penalty by Battalion 2019 first-round selection Liam Arnsby on Danil Antropov would put the Generals on their second powerplay of the evening. It would only take one minute and twenty seconds for Oliver Suni to find Nico Gross open in the slot to blast home his second of the game – this time beating Vrbetic with a wrist shot – for the second connection of the evening for the team’s two European players. The period would end 3-1 for the Generals, who maintained their lead in shots 30-14.

The Generals were put on the penalty kill early in the third as Generals defenseman, Lleyton Moore, was called for a cross check. The Battalion got their chances on the powerplay, including a shot off the post that rang throughout the building, but ultimately, the boys in red, white and blue managed to kill the penalty. Tensions on the ice and throughout the building increased throughout the third. This was expressed on-ice in increased physical play between the two teams, and off-ice in a healthy cheer off between Generals fans and travelling Battalion fans. Several scoring chances were exchanged throughout the period including a shot from Daniel Walker that rebounded to Cole Resnick in front of an open net, who was unable to get control of the bouncing puck to slide it in. With the Battalion net empty, the Generals broke into the zone. In a true two on none, Brett Harrison passed the puck over to Nico Gross who tapped in an easy empty netter to cap off his first-ever OHL hat trick. In the last minute of the period, Ryan Gagnier took a hard hit in the Battalion zone, and was slow to get up. Gagnier stayed on the ice though and as the Generals broke back into the zone, Dawson McKinney fired a shot which rebounded right to him and he took little hesitation in executing a Paul Kariya-esque “off the floor, on the board” to score his first ever OHL goal – and with it, seal the game for the Generals.

The final score was Generals, 5; Battalion, 1.

Hardest Working Player of the Game

Important Stat of the Night

Nico Gross scored as many goals in tonight’s game as he did in all of the 2018-19 season.

The Generals next home game will be facing off against Whitby-born Cole Perfetti and the Saginaw Spirit in the Tribute Communities Centre, this Sunday, October 6, at 6:05pm!

Paps Shines as Generals Down Spitfires
35 mins ago

Cooper Way Commits to the Generals
2 days ago