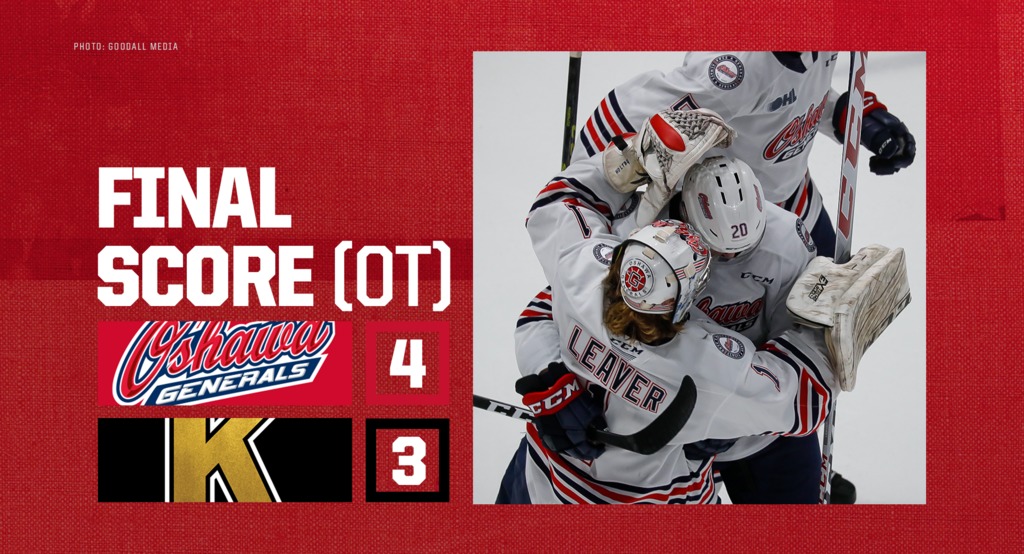 Ty Tullio scored 1:17 into overtime to lead the Oshawa Generals to victory over the Kingston Frontenacs Sunday night at Tribute Communities Centre.

Matthew Buckley, Nikita Parfenyuk, and Brett Harrison also scored for the Generals, who snap a three-game losing streak to move to 8-6-1-2 on the season.

Kingston opened the scoring in the first period, as Francesco Arcuri was left alone in the slot and tapped home a great pass from Jordan Frasca. Leaver made 15 saves in the opening frame to keep the score 1-0 heading into the 1st intermission.

In the second period, some tremendous forechecking work creates a turnover, and Matthew Buckley gets his 6th of the season to tie the game 1-1. Kevin Niedenz and Cooper Way both earned assists on the goal, which was one of the best shifts of the game for the Generals.

Just under four minutes later, Kingston star Lucas Edmonds scored his 10th of the season, beating Leaver over the glove on a snapshot. Initially, the play continued, but after a review, it was determined that the puck crossed over the line, giving the Frontenacs a 2-1 lead, which is what the score would be after 40 minutes of play.

In the third period, defenceman Nikita Parfenyuk jumped up in the play shorthanded and found a rebound after Cooper Way hit the post and buried it for his first career OHL goal.

“Really happy to see him get that goal,” Head Coach Todd Miller said after the game. “He’s got an offensive side to his game, and hopefully, we get to see more of it as we move forward.”

Kingston would regain the lead just over two minutes later, as Maddox Callens took advantage of a poor line change by Oshawa and was able to walk into the hash marks and beat Patrick Leaver short side to make it a 3-2 hockey game.

Trailing 3-2 with 1:10 left in the game, the Generals call a timeout and pull the goalie for an extra attacker. Off the faceoff, Brett Harrison finds the loose puck and beats Leevi Meriläinen to tie the game 3-3 with 1:06 remaining on the clock.

The game would head to overtime, but not before Kingston’s Arcuri gets called for tripping Ty Tullio. Meaning, Oshawa would have 1:41 of powerplay time to begin overtime.

Thanks to some great puck-moving by the Generals powerplay, it was Ty Tullio off a pass from Lleyton Moore who rocketed home a one-timer over the blocker of Meriläinen and sent the home crowd in a frenzy.

A massive win for Oshawa in this game, as they are now 1-1 at the halfway mark of their four-game homestand. Young forward Jordyn Ertel also made his OHL debut in this game, recording one shot on net. Patrick Leaver made 31 saves for his 8th win of the season.

Frontenacs star Shane Wright went without a point in this game. He now has just one assist in two games against Oshawa this season.

The Generals next game is on Friday night as they host the visiting Ottawa 67’s.