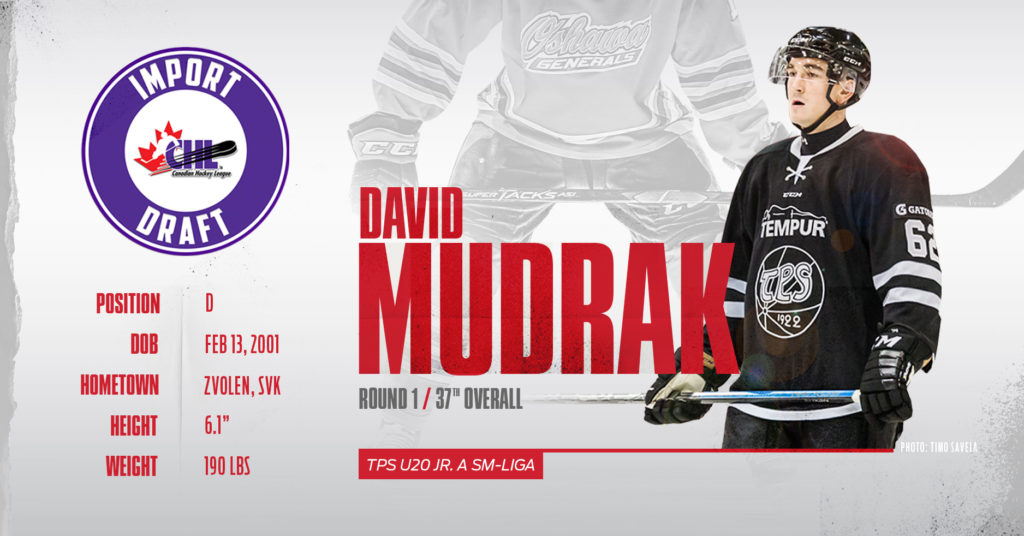 Oshawa, ON – The Oshawa Generals are proud to announce that they have selected David Mudrak in the 2020 CHL Import Draft. Mudrak is a 6 foot 1, 190lb defenceman who played for the TPS U20 Jr. A SM-Liga  in Finland last season. The Slovakia native also represented his country with the World Junior team last year.

The Canadian Hockey League announced details for the 29th annual CHL Import Draft which took place today, beginning at 11:00 am Eastern. The two-round draft takes place online with the order of selection rotating through each of the CHL’s three leagues using an inverse order of final regular season standings within each league from the 2019-20 season.  The Ontario Hockey League’s North Bay Battalion hold the number one pick, followed by the Quebec Major Junior Hockey League’s Acadie-Bathurst Titan at number two, and the Western Hockey League’s Swift Current Broncos who will select third overall.

Each team in the CHL is permitted to dress and play a maximum of two import players each season who are selected annually through the CHL Import Draft process.  The deadline for teams to submit their Import player protected list for the 2020-21 season was Thursday June 25 at 1:00 pm ET which will then determine how many of the maximum 120 selections will be made in the 2020 CHL Import Draft.

This past season Marco Rossi, an 18-year-old from Feldkirch, Austria, led the entire CHL in scoring with 120 points including 39 goals and 81 assists in 56 games during his second OHL season as a member of the Ottawa 67’s.  The 18th overall pick in the 2018 CHL Import Draft is now a top ranked prospect for the 2020 NHL Draft listed sixth among North American skaters by NHL Central Scouting.  Other past Import Draft picks that were among CHL league leaders in 2019-20 include Minnesota Wild prospect Alexander Khovanov, a 20-year-old from Kazan, Russia, who finished second in QMJHL scoring with 99 points in 51 games during his third season since being chosen second overall by the Moncton Wildcats in 2017, and Egor Sokolov, a 20-year-old from Yekatarinburg, Russia, who was third in QMJHL scoring with 92 points in 52 games, also in his third season, after being taken 35th by the Cape Breton Eagles in 2017.  In the WHL, Washington Capitals prospect Aliaksei Protas, a 19-year-old from Vitebsk, Belarus, chosen 26th by the Prince Albert Raiders in 2018 finished ninth in league scoring during his second season with 80 points in 58 games.

Last season a total of 81 players were selected from 14 different countries led by 17 players from the Czech Republic and consisting of 48 forwards, 27 defencemen, and six goaltenders.  The Broncos used the first overall pick to select Finnish defenceman Kasper Puutio who now competes for the Everett Silvertips and is a prospect for the 2020 NHL Draft.  Rounding out the top three picks were Slovakian forward Martin Chromiak chosen by the Kingston Frontenacs followed by Swiss defenceman Noah Delemont of the Titan..