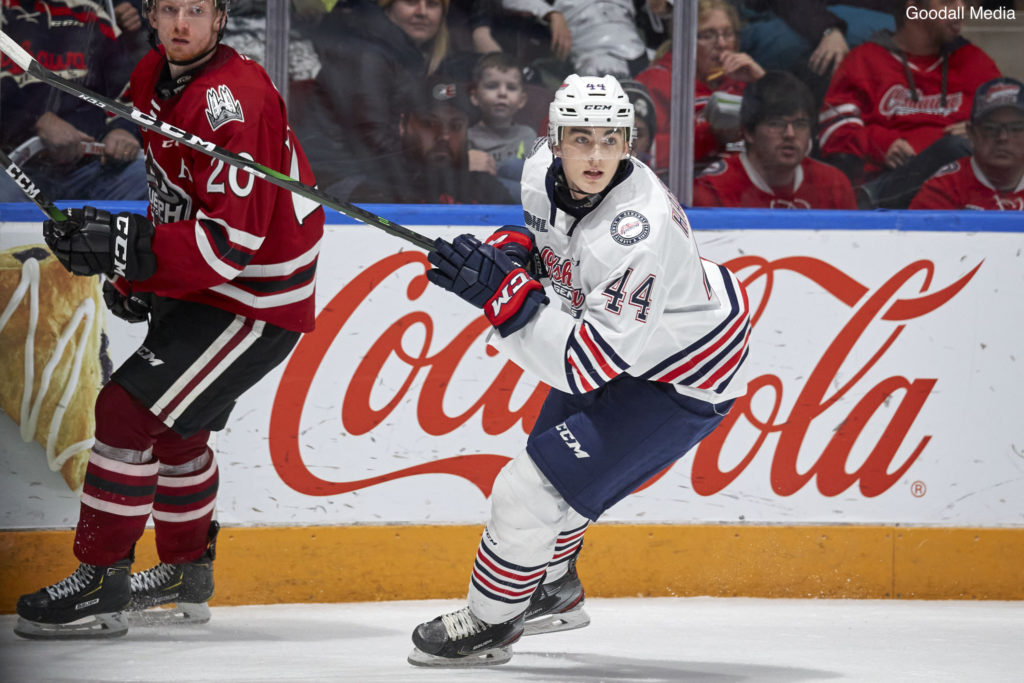 Oshawa, Ont., – After dropping their first two tune-up games 4-3 to the Barrie Colts and 7-1 to the Peterborough Petes, the Generals took their first win 4-3 over the Guelph Storm at the Sleeman Centre.

Entering heir final road exhibition game still without a win, the Generals came into Guelph on a mission to get their first win, especially after dropping a tough 7-1 loss to rival Peterborough last week.

The Generals came out on fire in the first period, scoring jsut minutes into the game. Making his first appearance this preseason, top projected NHL prospect Calum Ritchie fed the puck to OA Cameron Butler who made no mistake, making it 1-0 Oshawa.

The first period was one the Storm will hope to leave in exhibition play, with two bad turnovers late in the opening frame allowing the Generals to capitalize. Twice.

First, it was Brett Harrisons scoring with less than five remaining in the first period before Stuart Rolofs added another with less than a minute to go. Patrick Leaver stopped all seven shots he faced to start the game.

The second period was tilted more the way of the Storm, scoring twice on a whopping 19 shots in the middle twenty minutes.

Guelph would complete the comeback, or so they thought, with just over five minutes to go in the 3rd period. Jake Karabela’s second point of the night tied the game 3-3, leaving many thinking all the momentum was Guelph’s to lose.

Under two minutes later, Matthew Buckley snuck in behind Guelph’s defence, was sprung on a breakaway and scored the eventual game winner, giving the Gens a MUCH needed 4-3 confidence-boosting victory.

The Generals next preseason game takes place tomorrow night in Bowmanville at the Garnett B. Rickard Recreation Complex to start the first of three home-side exhibition matches. Limited tickets are available at the door for 20 dollars in support of Clarington Minor Hockey.