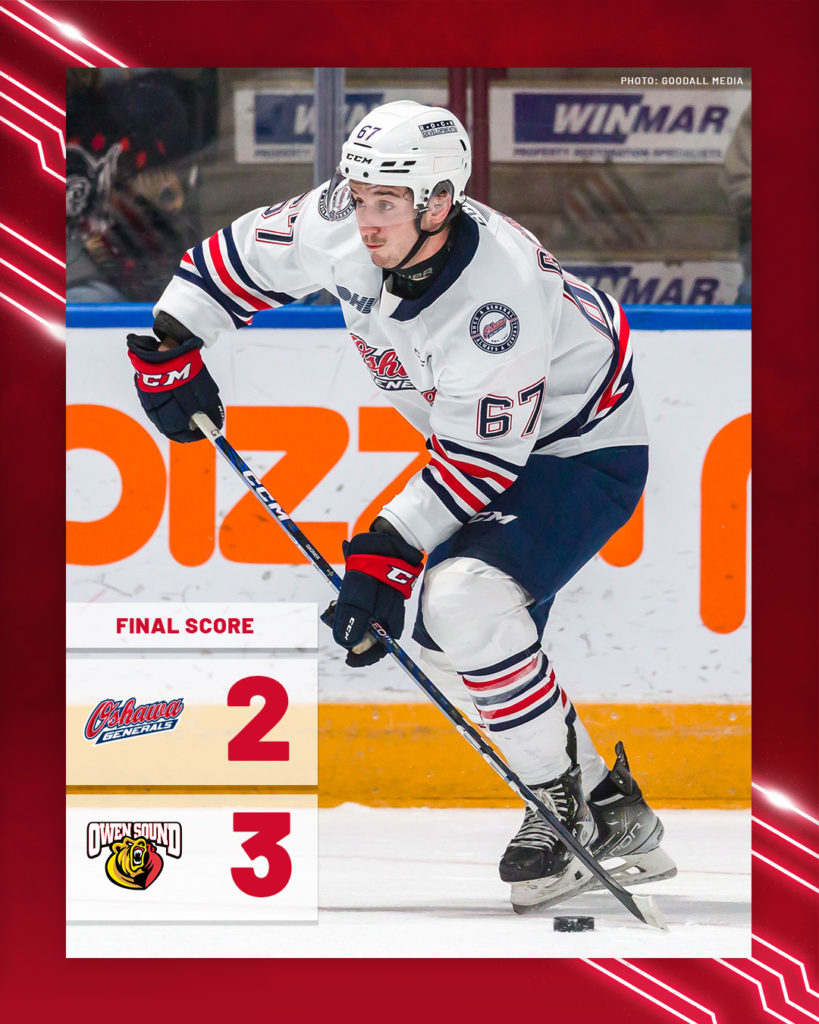 Oshawa, Ont., – It was a classic Friday night at the Tribute Communities Centre, with Oshawa Generals hockey filling the air. The energy throughout the building was high as GensNation thought this was finally the time to snap the seven-game losing streak. Unfortunately, for the season-high crowd of more than 5,100, the Owen Sound Attack squeaked out a 3-2 victory.

The start of the game was like an early Christmas present, gift-wrapped specifically for the Oshawa forwards. Less than two minutes into the game, Owen Sound took a delay of game penalty sending Oshawa to the early man advantage. After some offensive-zone puck possession, Ryan Gagnier tipped home his fourth of the season to give Oshawa the 1-0 lead. Penalty trouble continued for the visiting Attack, as they went on to take four more minor penalties in the period. Oshawa was unable to convert on any more of their first period power play opportunities.

Making his first start at home this season, Carter Bickle stopped 8/8 in the opening 20 minutes.

The second period started exactly the same way as the first period did, except this time for Owen Sound. The 1-0 Generals lead disappeared within 90 seconds, after Owen Sound scored back-to-back goals, first from Ethan Burroughs followed by Deni Goure. Momentum had completely shifted towards the Generals zone, being outshot and out-possessed for the entire period. An unlikely hero was able to send this game into the third period all even. Ryder McIntryre on a pretty neutral zone play deked through a number of Owen Sound defensemen before batting his own rebound out of mid-air and into the net. It was his first of the season and first as an Oshawa General.

The third period was the closest period of the game, where the 9th place Generals and 2nd place Attack looked more like division rivals than they did intra-conference foes. The final frame saw long stretches without any whistles, but more than one odd-man rush for both sides. On a delayed icing, Attack captain Colby Barlow beat out the whistle and ripped a clean shot over an unexepecting Carter Bickle. Now trailing 3-2, Nikita Parfenyuk took a late interference penalty, somewhat putting to bed any hopes of tying the game.

Fresh off his return from injury, Attack netminder Nick Chenard stood his tallest in the dying seconds of the game, holding off everything the Generals were able to throw on him.

The Attack would hold on for the 3-2 victory, handing Oshawa their eighth loss in a row, despite it being what some are calling their best game in the stretch. Oshawa’s next chance at snapping the streak comes on Sunday afternoon at 2:05 against newest acquisition Sasha Pastujov and his Sarnia Sting.