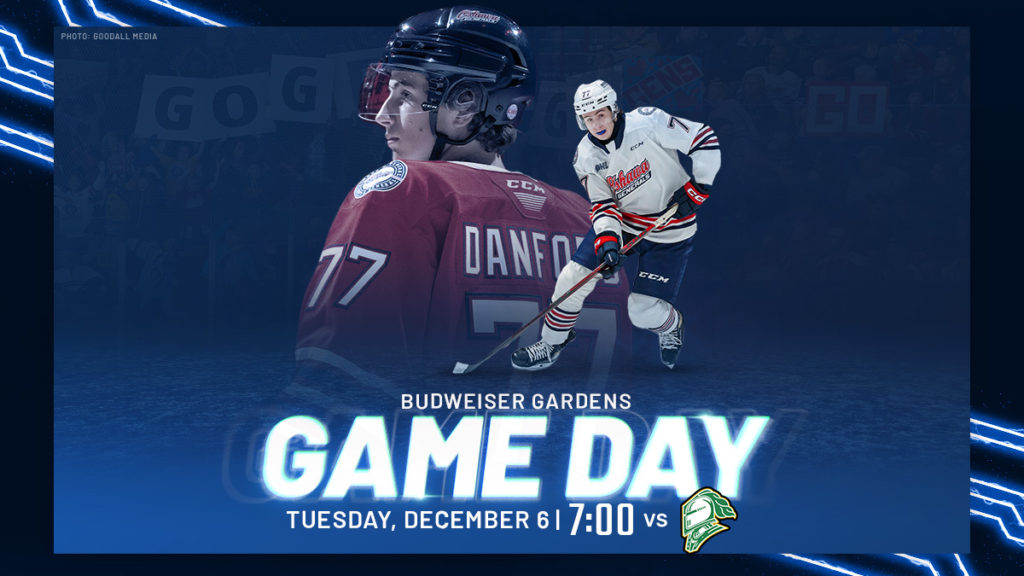 Oshawa, Ont., –  The Generals make their lone trip to the Budweiser Gardens tonight to take on the London Knights, closing up a four-game road trip. Despite the rough start to the four-game trip, losing to the Windsor Spitfires on Thursday, Oshawa took their heads up high into both Sarnia and Hamilton, picking up a 6-5 shootout win against the Sting and hanging on for a 4-3 win over the Bulldogs. The back-t0-back wins were the first consecutive wins since the beginning of October for the Generals.

The road trip comes to a close with a rare Tuesday night game for Oshawa, visiting the friendly confines of the Budweiser Gardens last night. Both teams enter the game on a high, with the Gens on a short two-game win streak and the Knights riding an eight-game win streak.

Oshawa enters the game tied for 8th in the eastern conference after taking four points over the weekend, while London continues to climb the western conference standings, now with a record of 17-7-1-0. Despite starting the season 0-4-0-0, the Knights have now strung together 12 wins in their last 13 games and lead the midwest division.

London native Brett Harrison will be the key if Oshawa is going to take down the Knights. In 19 games this season, Harrison has scored 19 points (12 goals and 7 assists) including 10 points in his last six games. Despite missing five games to start the season, Harrison is now amongst the team leaders in every offensive category, behind only 17-year-old and NHL-draft prospect Calum Ritchie, Lleyton Moore, Stuart Rolofs and Cameron Butler.

The Knights are led offensively by early-season acquisition, and local, George Diaco. In 22 games with the Knights, Diaco has scored 11 goals and added 15 assists. Team leader Sean McGurn paces the group with 34 points in 25 games this season.

Oshawa is also expecting the return of Jordyn Ertel, who has missed over a month due to mono.

The Gens will need one of their best efforts of the season if they’re to knock off the Knights tonight, but their recent play has shown that more and more is clicking each and every night. Puck drop is scheduled tonight for 7:00 p.m.