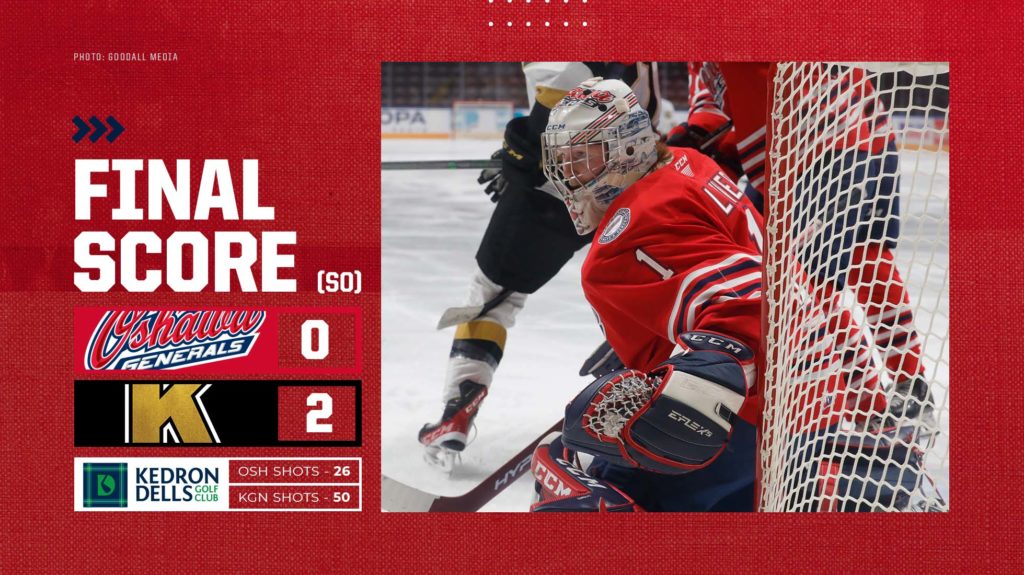 Leaver stopped 48 of the 49 shots he faced in one of the best performances of his OHL career. Multiple of those saves were highlight-reel worthy, leaving even his coach in awe.

“Leaver was absolutely spectacular tonight, it’s a shame we couldn’t score a couple for him,” Todd Miller said after the game. “His numbers speak volumes; he’s playing on another level right now and that’s great news for our hockey team.”

The game’s first goal came off the stick of Shane Wright, in a goal that quickly went viral online. Wright was behind the goal line when he made a no-look, between the legs pass that banked off Leaver and into the net.

That goal was the only one to beat Leaver all game long, as Kingston’s second goal came from Lucas Peric with just 40 seconds left and the net empty.

Oshawa wasn’t able to sustain consistent offensive pressure in this game. Every time they had a shift of solid pressure in Kingston’s zone, they would spend the next few chasing the puck. Kingston ended the night outshooting Oshawa 50-26, which included a 2nd period where the Frontenacs dominated the Generals, outshooting them 23-5.

This was Oshawa’s fifth game in eight days, and they will now have some time to rest and prepare for three games in three days next weekend.

Head Coach Todd Miller believes the time off this week to prepare and reset will be good for the entire team moving forward.

“To get some good practice days in to work on some of the small things will help our guys out a lot. We’ve played a lot of hockey lately and we will be equally as busy upcoming here, so how we use our practice days will be vital to our success moving forward.”

The Generals will have a chance at revenge on Friday night, as they will be travelling up the 401 to take on the Frontenacs in Kingston before then battling the Peterborough Petes in a home-and-home on the weekend.