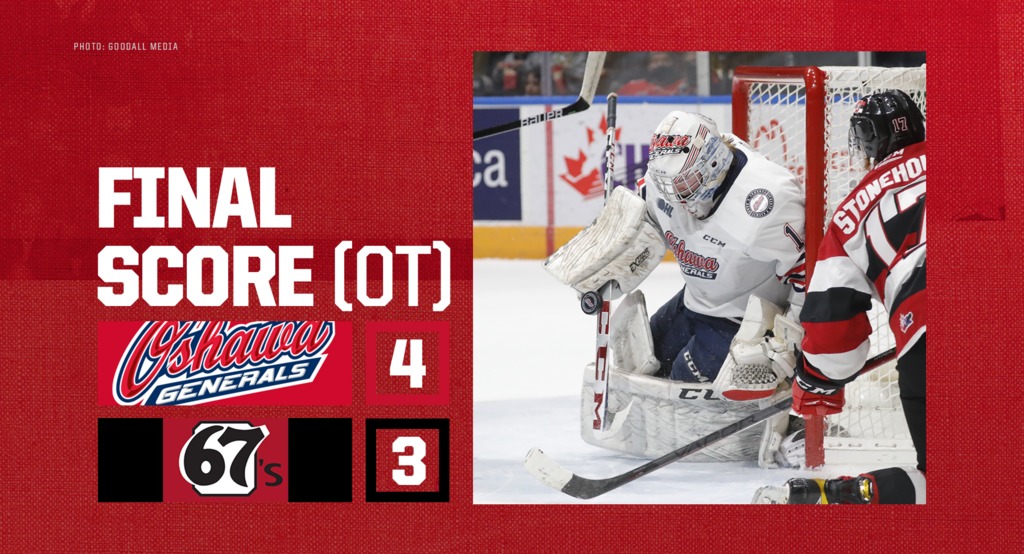 Brett Harrison scored twice, including the overtime winner, to lead the Oshawa Generals to a massive 4-3 victory over the Ottawa 67’s.

Patrick Leaver, after allowing three goals on five shots in the first period, shut the door the rest of the way with 31 straight saves.

Oshawa jumped out to an early 2-0 lead thanks to goals by Andrew Whitton and Brett Harrison. Whitton’s goal was the first of his OHL career, something coach Todd Miller was thrilled to see happen.

“He has a great shot, and we were happy to see him use it tonight,” said Miller after the game. “Really happy to see him get that one, and if he keeps working hard and going to the dirty areas, we will see even more production out of him.”

However, Ottawa wouldn’t allow Oshawa to enter the first intermission in the lead, scoring three straight unanswered goals to take a 3-2 lead into the intermission.

“Not how we wanted to enter the intermission after being up 2-0, that’s for sure,” said head coach Todd Miller. “However, the message was just to settle down and refocus; there’s still 40 minutes to play.”

“We also had all the confidence in the world that Leaver would shut the door the rest of the way.”

After a five-goal 1st period, there were none in the 2nd, as both teams played a tight-checking game in the neutral zone. Leaver made 19 saves in the period, as Ottawa failed to extend their lead.

In the third period, it would be Ryan Gagnier from McKinney and Smith tying the game just 2:13 into the period.

Both goaltenders would make some huge saves down the stretch to keep this game 3-3 after 60 minutes, forcing overtime in Oshawa for a second straight game.

Last Sunday, Ty Tullio brought the crowd to its feet with a great one-timer in overtime to defeat the Frontenacs.

Tonight, it was Brett Harrison finding a loose puck in the crease behind Will Cranley and tapping it home to give Oshawa their second straight win.

With the win, but Ottawa still earning a point, Oshawa moves just one point back of the 67’s with two games in hand.

The Generals will wrap up their five-game homestand on Sunday night as they play the visiting Hamilton Bulldogs for the first time since the season opener on October 8th.