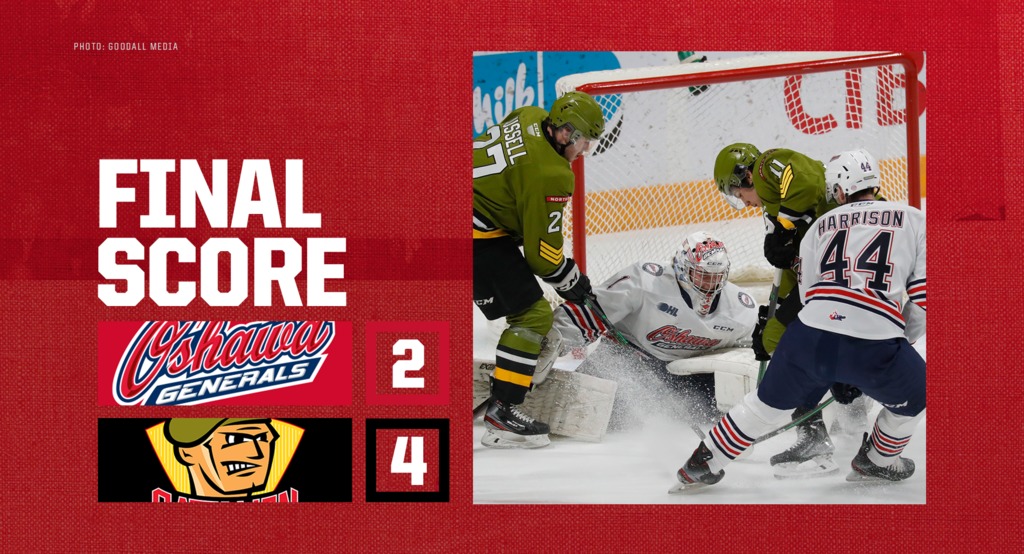 The Oshawa Generals fell 4-2 to the North Bay Battalion on Friday night at Tribute Communities Centre.

Brandon Coe, Tnias Mathurin, and Matvey Petrov each had two points for North Bay, as the Battalion earned their 11th win of the season.

This was the first of four-straight home games for the Generals, who fall to 7-6-1-2 on the regular season.

It was Oshawa who struck first in this game, as Ryan Gagnier beat Battalion’s netminder Dom DiVincentiis for his seventh of the season to give the Generals a 1-0 lead.

However, with just 35 seconds left in the period, Tnias Mathurin fired one past Patrick Leaver to make it a 1-1 game heading into the 1st intermission.

At around the halfway mark of the 2nd period, it was Dylan Wakely from Tnias Mathurin to give the Battalion their first lead of the game.

Entering tonight’s game, the Oshawa Generals had the 2nd best powerplay percentage in the league at 28.8%. On the powerplay shortly after the Battalion took the lead, rookie Calum Ritchie found a rebound off a shot from Ty Tullio to tie the game 2-2. Ritchie missed the last game with an upper-body injury but wasted little time making his return to the lineup impactful.

The Generals would then have to kill off a 5-on-3, which they would do successfully. However, with just 1:27 remaining in the period, sniper Kyle Jackson capitalized off a great pass from Matvey Petrov to give the Battalion a 3-2 lead heading into the final period.

In the third period, the Generals struggled to maintain consistent pressure in the offensive zone, getting outshot by North Bay 11-9 in total. Eventually, with Leaver pulled for the extra skater, Matvey Petrov iced the game with an empty-net goal, securing the 4-2 victory for the Battalion.

“We are clearly disappointed in tonight’s result, but we have to move on quickly,” Head Coach Todd Miller said after tonight’s game. “This is a very important homestand for us, and we have to be much better on Sunday.”

The Oshawa Generals will have their hands full on Sunday night as they play host to Shane Wright and the Kingston Frontenacs; puck drop is scheduled for 6:05 pm.