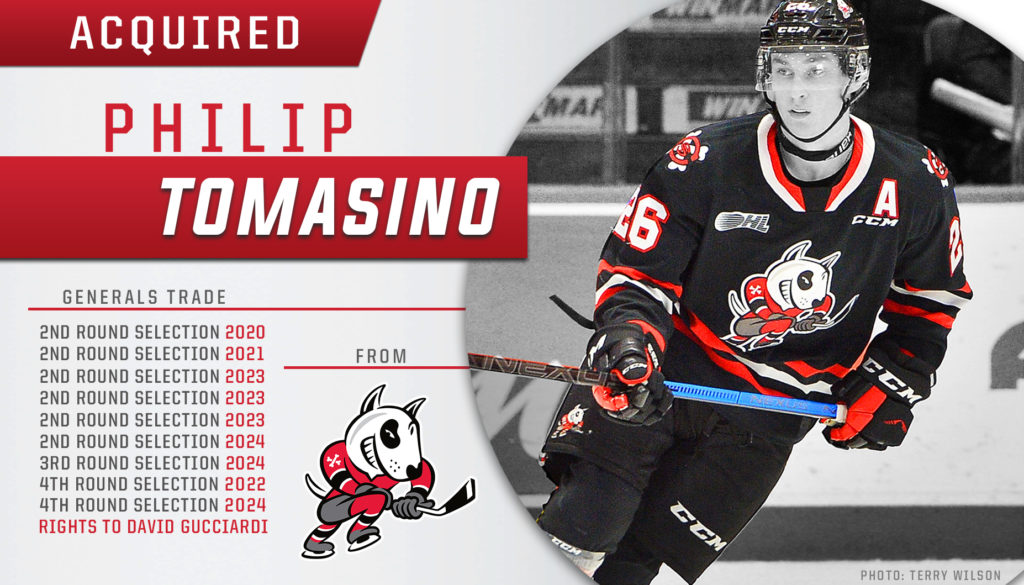 Oshawa, ON- The Oshawa Generals announced today they have acquired forward Philip Tomasino from the Niagara IceDogs in exchange for draft selections.

Tomasino was selected by the Predators in the first round (24th overall) of the 2019 NHL Entry Draft in Vancouver. The 6-foot, 181-pound forward, currently in his third Ontario Hockey League season, has appeared in 36 games totalling 57 points (22 goals, 35 assists). He was named the OHL’s Player of the Week on Oct. 7 after posting seven points (3 goals, 4 assists) in two games. Last week he was named to the CHL Team of the Week, after recording 11 points (3 goals, 8 assists) in four games. Tomasino currently sits eighth in Ontario Hockey League scoring.

The high-skilled playmaker tallied 72 points (34 goals, 38 assists) in 67 games with Niagara last season, his second OHL campaign. Compared to his rookie season in 2017-18 (5 goals, 19 assists), he posted improvements of 48 points and 29 goals, the latter of which was the highest increase in the entire CHL. Tomasino led the OHL in game-winning goals with 12 last season. In October, he signed an entry-level contract with the Predators.

“It’s a big deal for us to be adding a talent like Philip to our line-up,” said Vice-President and General Manager, Roger Hunt on acquiring the NHL first rounder. “Adding a player like him obviously comes at a cost, but getting him in our line-up was something we wanted that will be a great addition now and in the future.”

Scouting reports below outline what kind of player will be joining the Generals:

“He’s a fearless puck-carrier, willing to pay the price to take the puck to the high-danger parts of the offensive zone. His hands are elite”– EPrinkside.com 2019

“Tomasino is a swiss-army knife forward whose versatility made him effective”– Hockeyprospect.com 2019