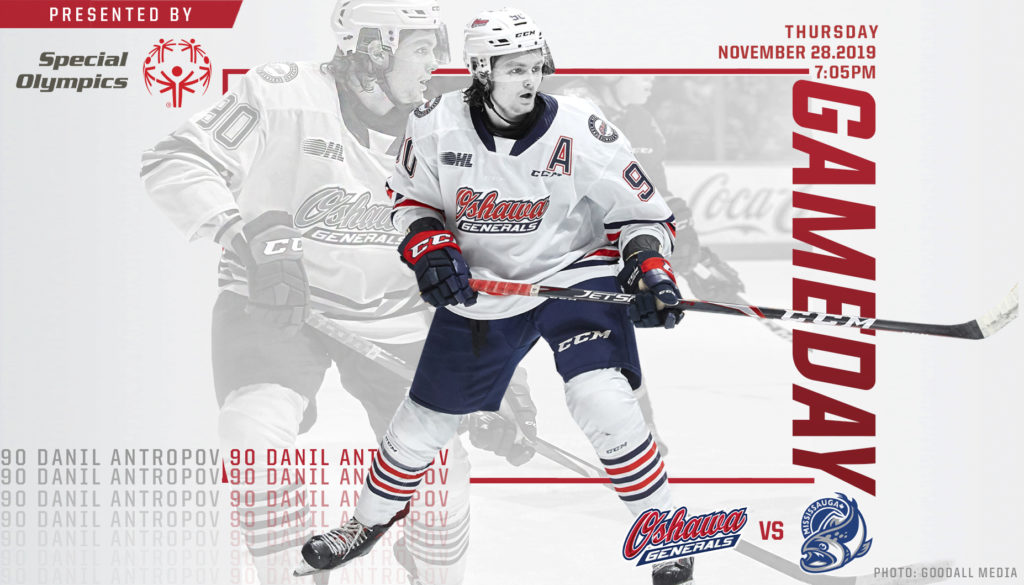 The Mississauga Steelheads come to town looking to beat your Generals for the first time this season. In their first two match-ups, the Generals have swept.

The Oshawa Generals, Law Enforcement Torch Run (LETR), and Special Olympics Ontario are teaming up to raise awareness about the importance of individuals with an intellectual disability during tonight’s game.The game on will feature:

Danil Antropov – Antropov has played well this year and closed out last Sunday’s 7-0 victory in style. In a shuffle of lines, Antro was slotted in as the third line centre and it worked out for him, he potted one and added one assist playing with Daniel Walker and Jacob Winterton. Don’t be surprised if that line sticks together again for tonight’s game.

Lleyton Moore – The Generals sophomore has finally potted his first as a General after 29 regular season games and 15 playoff bouts. Don’t be surprised if the levee breaks and we see a lot more of Lleyton’s shots squeak past opposing ‘tenders. Moore is one of the smoothest skating defensemen in the league, his transition game is strong, and he can rush the puck up ice like nobody’s business. If he keeps denting the twine, his draft stock could continue to rise.

Thomas Harley – One of the best defenseman in the OHL. Harley has been a point-per-game as a rearguard. Drafted in the first round of last year’s NHL draft (18th overall by Dallas) Harley has only grown his game. Harley is definitely in the discussion to be considered the greatest player in franchise history. Harley has gone cold with only one point in his last five games, but remains their leading scorer with 22-points in 22 games.