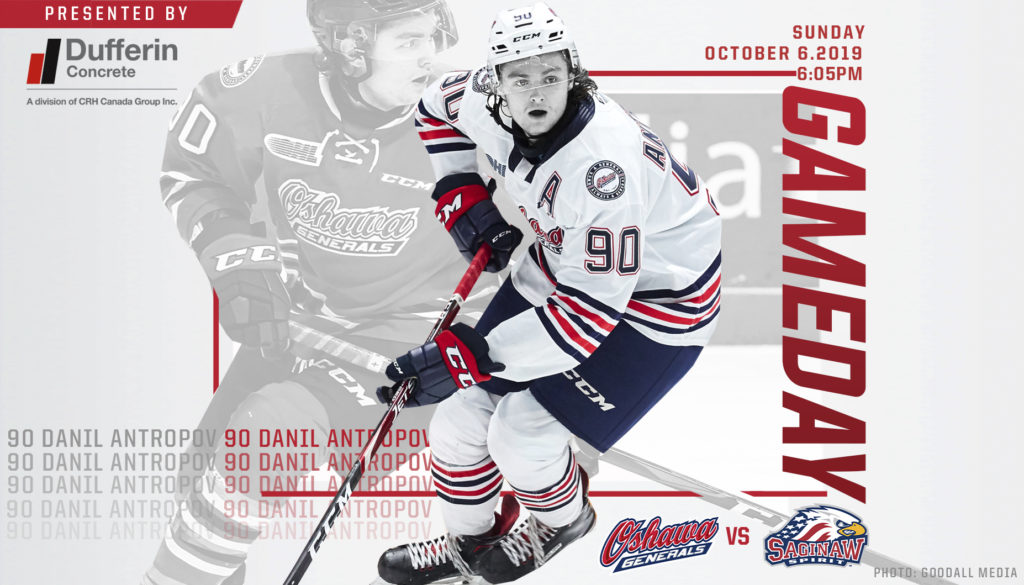 Tonight’s game is presented by Dufferin Concrete, who will be holding a Chuck-A-Puck into a truck in support of Grandview Kids, during the second intermission. Pucks can be purchased at their tables in Sections 106 and 119. Prizes include a 55” Samsung 4K TV, Playstation 4, foursome of golf at Deer Creek Golf Club, and 4-tickets to an upcoming Generals game with a prize pack.

Serron Noel – The Generals leading scorer from last year has returned for the season, and has made his presence known. In last night’s win against Hamilton, Noel scored a goal and added two assists. After a 2-game stint in the pre-season with the Florida Panthers, Noel is back and ready to finish his OHL career on a high note. Noel will be using his 6-foot-5 frame and silky smooth hands to his advantage as he looks to help lead the charge in the Generals pursuit for a sixth Memorial cup.

Mitchell Brewer – The Generals defender is back and better than ever. Brewer attended development camp with the San Jose Sharks this offseason. In the first six games of the season, Brewer already has 4-assists, and he is on his way to passing his career high of 18-points. The Generals’ alternate captain is a solid shutdown defenseman who has been ironing out his offensive game. Brewer will be motivated to show NHL scouts that they made a huge mistake in passing over him in the 2019 draft.

Cole Perfetti – Whitby-born, Cole “Confetti” Perfetti drew the attention of the hockey world this summer on an international stage. The forward lead the Hlinka Gretzky Cup in scoring this summer with 8-goals and 12-points. In his last matchup against the Generals, last February, Perfetti scored the game winning goal in overtime. Perfetti is projected to be selected in the Top-10 of the upcoming 2020 NHL Entry Draft. So far this season, Perfetti has been strong offensively with 8-assists and 9-points in his first 7-games of the season. Look for Perfetti to try his best to pepper as many shots on goal as he can.

Ilya Solovyov – The 19-year-old Belarusian has made a strong impact in his first season in North America. The 6-foot-3 defenseman has 11-assists and 12-points leading the Spirit in scoring through the first 7 games of the season. Solovyov reportedly chose the Spirit over joining a team in Russia’s top league, the Kontinental Hockey League (KHL). Solovyov is a very aggressive player offensively and has no issue throwing his big body around.

Key Notes Heading Into the Game: