GAME PREVIEW: Firebirds Fly in on the Wings of a 9-Game Win Streak at 6:05pm 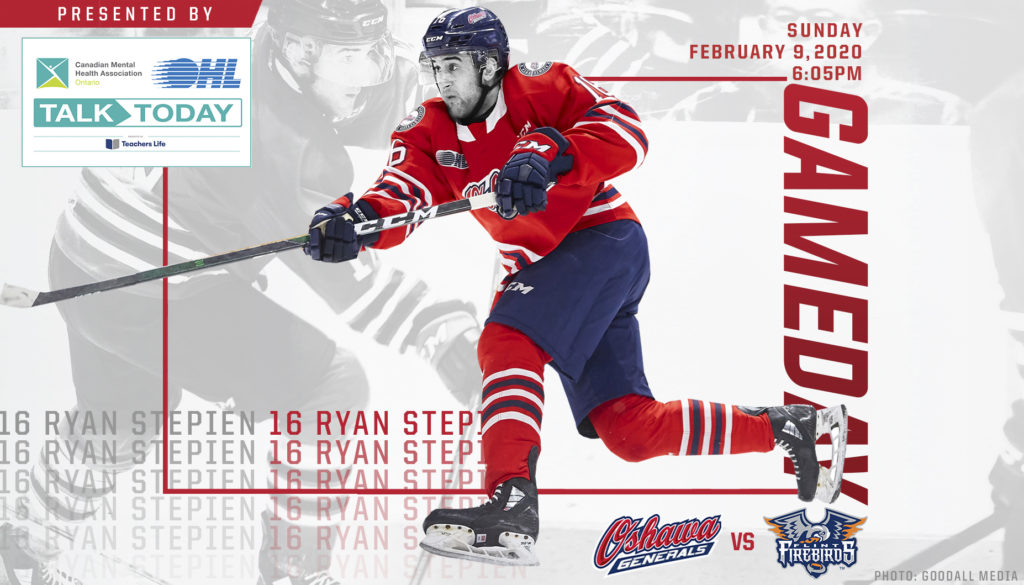 Oshawa enters the first of two home games this weekend facing off against the Flint Firebirds. The Firebirds have put the “fire” in their moniker over the past few weeks. They roll into ‘Shwa-llywood riding a nine game winning streak. The streak has bumped them up in a powerhouse western conference into the the fourth spot that the Spitfires had occupied for most of the season. The Firebirds are one win away from tying their season record for games won – its pretty safe to say that this will be the best season in their young history.

Ty Dellandrea and diminutive Belarusian import Evgeniy Oksentyuk have been leading the charge offensively, with help from the point in the form of Riley McCourt. Deadline acquisition Riley Piercey has been explosive, coming over from Barrie accompanied by a bump in his offensive output. Flint has been so offensively dominant, that over this stretch they have averaged just over six goals-per-game. Your Generals will try to cool off this team.

This is the second and final time these teams meet this season. Flint won the first meeting.

The last time these teams battled happened just after the turn of the decade. The game was very back-and-forth.  Oshawa’s Jacob Winterton recorded one assist against his former team, on a goal by Dawson McKinney. Ty Tullio nearly had a Gordie Howe hat-trick, recording one goal and a fight, against Firebirds rookie Tyler Deline. The game went to overtime, and Dennis Busby sealed it for Flint. Flint saw a strong performance from Oksentyuk who netted a goal and added two assists. Giovanni Vallati was the lone star of the game from Oshawa, setting up two goals in the 5-4 loss.

Ryan Stepien, RW – Stepien has been phenomenal since coming over in return for Serron Noel from the Rangers. The forward is strong on his feet and a fast skater. He has played on several different lines, but one thing that remains is his ability to be dangerous on both ends of the ice. Seeing time on the powerplay and scoring his lone goal on the penalty kill, Stepien is versatile. The winger has grit, determination, and strong hockey smarts. He’s always fun to watch.

Ty Tullio, RW – A sniper who is just as dangerous making plays. Tullio is a goal scorer and he means business. Tullio has taken a massive increase in role this season in stride. Counted on as one of the Gens leaders to put up numbers consistently, he has delivered. He is sitting at over a point-per-game pace – and improvement on already strong numbers. Tulzy knows how to sling pucks on net, and has put up at least four shots in a game in 21 of his 49 games this season. He’s found a home on Phil Tomasino’s wing, the two have some residual chemistry after playing alongside each other in years past in summer hockey tournaments. The two are magic on ice, and will be again tonight.

Ty Dellandrea, C – Dellandrea has lead the Firebirds streak with 21 points through their nine game conquest. Dellandrea hasn’t just been the leader this season, he is without a doubt the best Firebird in history – excluding the Pontiac Firebird. Granted the franchise is only in its fifth season, that doesn’t devalue the impact that Dellandrea has had. The first and only player drafted out of Flint in the first round, he is no stranger to playing on big stages, having spent some time in the AHL last season with Texas and was an alternate captain for Canada at the world juniors this year. He’s a threat to score or set up a play. He’ll be dangerous tonight.