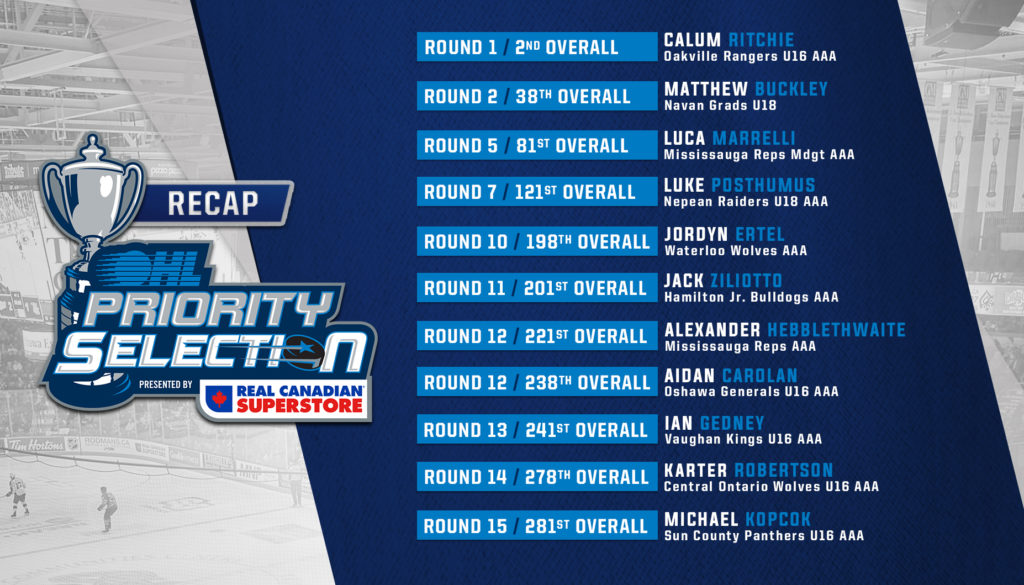 Oshawa, ON – The 2021 OHL Priority Selection has come and gone, leaving #GensNation ready for the upcoming season. After 14 months of waiting, the organization is excited to have new prospects, and a #FutureGENeration to look towards.

The team made 11 selections throughout 15 rounds across the two-day event, featuring seven forwards and 4 defensemen, highlighted by 2nd overall pick, Calum Ritchie.

Ritchie, captain of the Oakville Rangers U16 AAA, spearheaded a slew of Rangers selected in the first round of the OHL Draft.

“We were thrilled when we knew we were able to get Calum Ritchie,” said team general manager and vice-president Roger Hunt. “We believe he is the best player and who he gets compared to should prove that. He’s a multi-dimensional player who can win draws, has a scoring touch in the offensive zone, and can play responsibly in his own zone without sacrificing his elite talent and his high-end skill.”

Ranked by many as one of the top players of this class, Ritchie says he is excited to make an immediate impact, but thanks his teammates for helping him get to this point of his career.

One of those teammates was Generals’ 2nd round pick, Matthew Buckley. Before joining the Navan Grads U18, Buckley played with Ritchie in Oakville.

Buckley is one of the other 10 selections made during this year’s draft, one that Hunt is very excited about, despite the adjustments his staff needed to make.

“Another draft in the books and I would like to thank our scouts for all their hard work as always. This was very different than in the past with limited in-person viewings but this year we relied on large numbers of hours watching video, making in-person calls to players and getting as much information as possible from coaches.

This 2005 draft class will be an exciting group as we move forward, adding some high-end talent in our future Gens player pool. Now, it’s time for those players to get to work to be ready for training camp in early September.”