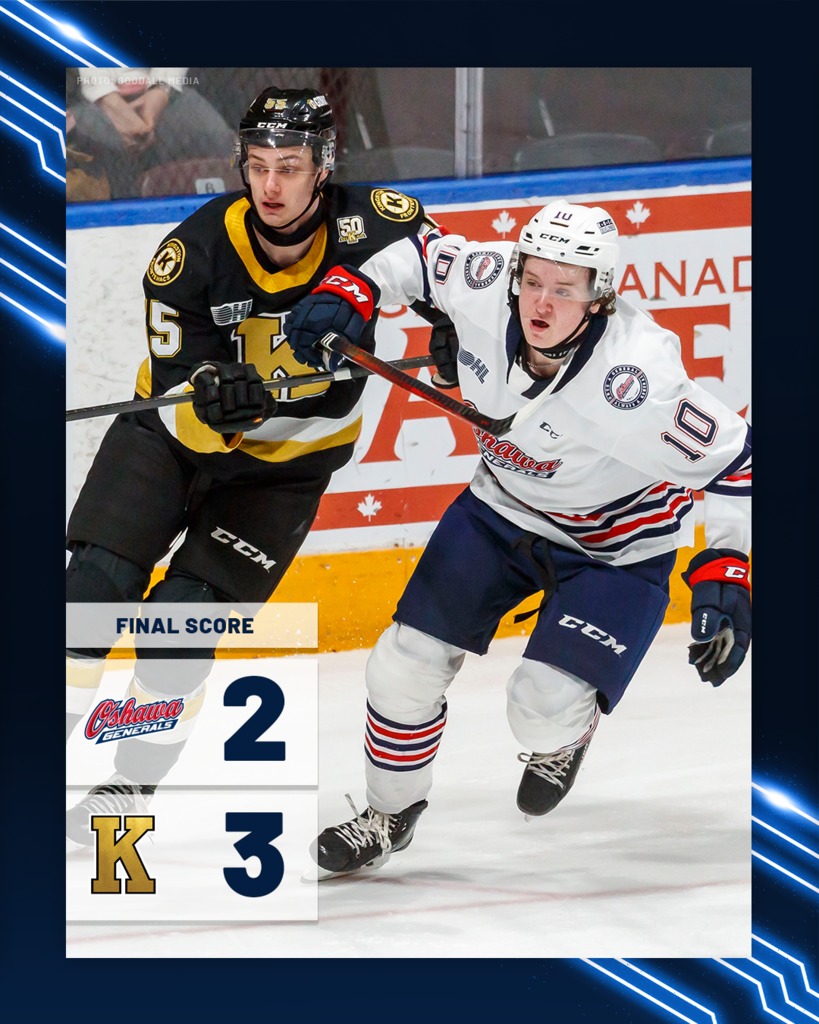 Oshawa, Ont., – The Oshawa Generals’ seven-game road trip came to an end with a loss in Kingston by a score of 3-2.

The first period was one Calum Ritchie called sloppy for both sides. While the shots were 11-11 at the end of 20 minutes, neither side was able to create too much offensive zone pressure. When a side could set up in the zone, there was little in the way of high-quality chances.

Early in the frame, the Kingston Frontenacs used a defensive breakdown from the Generals to send Matthew Soto in all alone. Carter Bickle, getting his first start since his win on Friday night in Kitchener, was able to hold his goal line and goal post to keep the puck out.

On their second defensive miscue in the period, Oshawa fumbled a puck in their own zone, giving Kingston an easy passing play to lead to the opening goal. Despite a short power play opportunity to finish the period, Oshawa failed to solve Frontenac netminder Ivan Zhigalov and would end the period without a goal.

The second period opened with the remainder of the Generals’ power play time, and with a fresh sheet of ice the top power play in the OHL made no mistake. A point shot from NHL draft-eligible Calum Ritchie deflected off a Frontenacs’ stick and into the back of the net. Under a minute later, Kingston regained their lead after a loose puck got through Bickles’ pads after a scrum in front of his net.

With less than five minutes to go in the period, Stuart Rolofs snuck in behind some Frontenac defenders and was sent in all alone. Rolofs made no mistake on his breakaway and tied the game with his 16th of the season. Bickle stood tall throughout the period to keep his team in it, with shots finishing 20-20.

Nothing was going for either team in the third period until the 5:40 mark when Cal Uens sprang Paul Ludwinski and Maddox Callens for a 2-on-1. A perfect pass from Ludwinski was finished cleanly by Callens for the 3-2 Kingston lead. Oshawa applied a lot of pressure in the final minutes of the game but was unable to find the equalizer, losing by a score of 3-2 for the second straight night.

Jacob Oster named OHL Goaltender of the Week
2 days ago