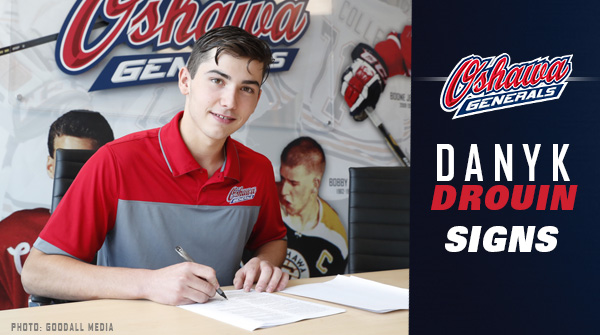 Oshawa, ON– The Oshawa Generals announced today that forward Danyk Drouin has committed to an Ontario Hockey League standard player agreement with the Hockey Club.

The Casselman, ON native was the 13th Round selection by the Gens in the 2017 OHL Priority Selection. He was a member of the league champion Casselman Vikings of the CCHL2 during the 2017-18 season where he tallied 14 goals and 26 assists for 40 points in 33 games played.

The 6’1, 161-pound forward participated in the Gens orientation camp in 2017 and 2018, gaining invites to main camp both years.

Drouin joins Ty Tullio and Dylan Robinson as 2018 signing additions to the Generals roster for the 2018-19 season.

2018/19 Season Tickets are on sale now! Be there every step of the way as this year’s team drives for an OHL title and beyond. Don’t miss a minute of the action in the comforts of the state-of-the-art Tribute Communities Centre. It’s great hockey, at a great venue, with great value. Oshawa Generals season tickets – sit back, relax and witness history. Ticket information–click here!