Butler more than excited to be a General 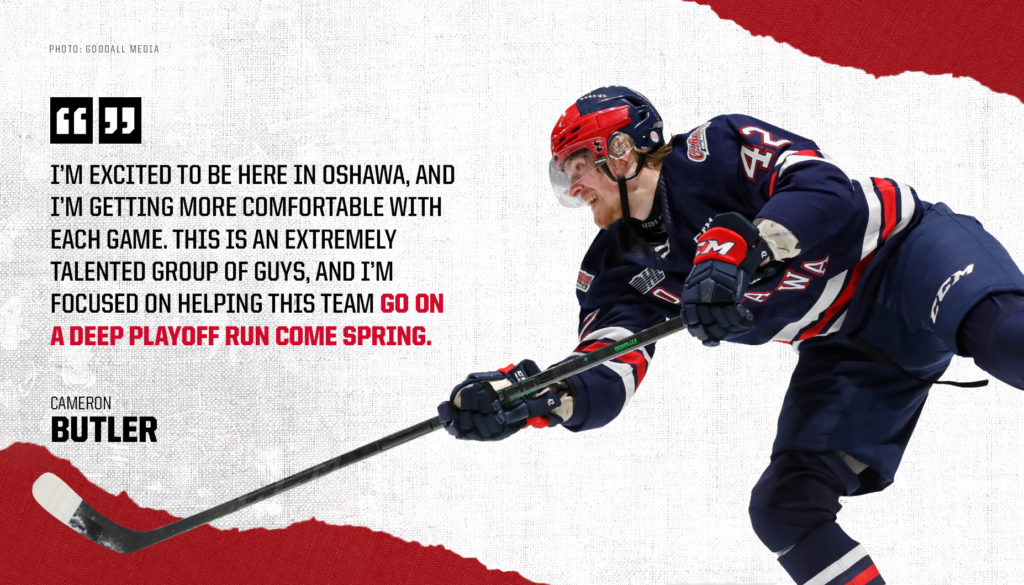 Oshawa, Ont., – Sometimes, news is heard well in advance, with an abundance of time to process. For newly acquired Generals forward Cameron Butler, that wasn’t the case.

“I actually heard that Oshawa was a possibility early Monday morning,” Butler said about learning he was about to be moved to Oshawa. “Just a few hours later, the trade was announced, and I was shifting my focus to being a General.”

Butler is no stranger to Tribute Communities Centre, as prior to playing for the Niagara IceDogs, he was a member of the Peterborough Petes. Being a member of the biggest rivalry in the OHL certainly made him accustomed to the atmosphere GensNation brings to home games.

The Petes drafted Butler in the second round, 27th overall in 2018. He played 103 games with the organization before being dealt to the IceDogs during the 2019-20 season as a key piece in exchange for Akil Thomas.

Butler quickly established himself as a leader on the IceDogs in the final 27 games of the 2019-20 season while also producing offensively with 13 points. Just days before the 2021-22 season began, the IceDogs announced that Butler would be the team’s captain.

“Every time people speak about Butler, the first thing we hear is how terrific of a leader he is, on and off the ice.” Generals Head Coach Todd Miller said about his new forward.

Last Monday, one week before the OHL trade deadline, the Generals finalized a trade that sent a 2nd round pick in 2025 and an 11th in 2024 to the IceDogs for Butler. He made his Oshawa debut on Thursday night at the Meridian Centre, facing the team he captained days prior.

“It was a bit of a weird feeling for sure,” Butler said about facing the IceDogs. “It was weird walking into the visitor dressing room, and I still have a lot of friends on that team.”

However, the moment the puck was dropped, Butler was back to being his usual self on the ice; Using his terrific combination of size and skill that makes him one of the best power forwards in the league.

“He’s got great size and uses it well to create space and be a pain to play against,” Miller said when asked about what made Butler an attractive player to add to this lineup. “While also being able to play on our top lines with our most skilled players.”

“[Butler’s] a terrific player that I’m glad is on our side now; he makes us a tougher team to play against. He’s going to be a phenomenal member of the Oshawa Generals”.

Through two games with the Generals, Butler has recorded one assist. On the season, he currently sits with six goals and 18 assists in 26 games. His 0.96 points per game are putting him on pace for his best OHL season yet. However, points aren’t what Butler is focusing on moving forward.

“I’m excited to be here in Oshawa, and I’m getting more comfortable with each game. This is an extremely talented group of guys, and I’m focused on helping this team go on a deep playoff run come spring.”