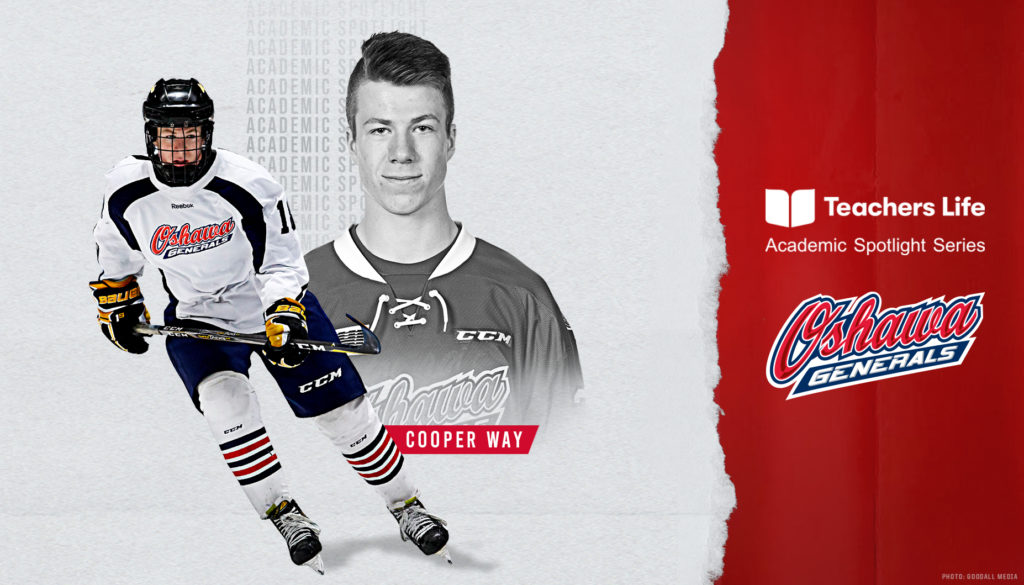 Oshawa, ON– Oshawa Generals forward Cooper Way is working towards making the regular-season roster on a full-time basis this season. While training on and off the ice, the Waterloo, Ont., native finds great success in school.

Currently in Grade 12, Way is studying his favourite subject, Calculus and Vectors, and English at St. David Catholic Secondary School. In Grade 11, he finished with an overall average of 95 per cent over seven courses, including 92 per cent in Biology and 96 per cent in Chemistry. Way says he would also spend time as a referee for minor hockey and on the golf links.

Last season, Way played 46 games with the Elmira Sugar Kings of the GOJHL. He scored eight goals and added 17 assists for 25 points. Being able to balance school and athletics has always been a priority for Way.

“Sometimes it can be hard to balance school, hockey and a personal life.” says Way. “But, you learn to work with it. I typically have a steady training schedule and so I work on my school work most of the time when I am not training. Making time for my personal and social life is important so I work in time and make plans to allow myself to step away from school.”

Like many, Way’s goal is to play hockey professionally, but he knows it is important to pursue education alongside the sport.

“It is important to me because you always need to have a plan,” says Way. “Of course my goal is to play hockey professionally, but I feel you need to have something else happening in your life. With the time we have during the season, and especially right now during the offseason, I think it is important to get some high school credits out of the way so I can graduate on time.”

Way continues to prioritize his education and is finding a great deal of success because of his strong work ethic. He has won awards for highest course marks in Accounting, Physics, Biology, and Advanced Functions. In his Grade 11 year, Way also received the Academic Excellence Award for being in the top five per cent of honour roll students in his grade.

“Teachers Life are proud sponsors of the OHL’s Academic Spotlight Program,” says Doug Baker, President and CEO of Teachers Life. “The dedication of the OHL’s student-athletes to their education mirrors Teachers Life’s commitment to students and educators across the province. By celebrating these athletes, they become role models to kids in their communities through their dedication to academic excellence, integrity and curiosity.”

Of course, COVID-19 has changed the way students are learning in school. More and more classes are taking place online and students are consistently adapting to the new systems. Way said it was a bit difficult at first but he has rolled with the punches.

“Although it was difficult given the situation we were in, I continued to set aside time to complete my school work to achieve my highest grades possible,” says Way. “Initially, the beginning of online school last year due to COVID was an adjustment, but I eventually became comfortable with the format and style of a virtual school.”

Way strives to be someone young student-athletes can look up to, as an example that you can be a good hockey player and good in school at the same time.

“I would tell any young player that you need to have a plan outside of hockey. Education is only going to help you as you go further in life and there are many important and valuable things you can learn from school outside of the curriculum,” says Way. “For all people, especially athletes, school requires focus and discipline to complete work and learn. In hockey, focus and discipline are two important characteristics for a player to have, and practicing them through school can transfer over to sports.”