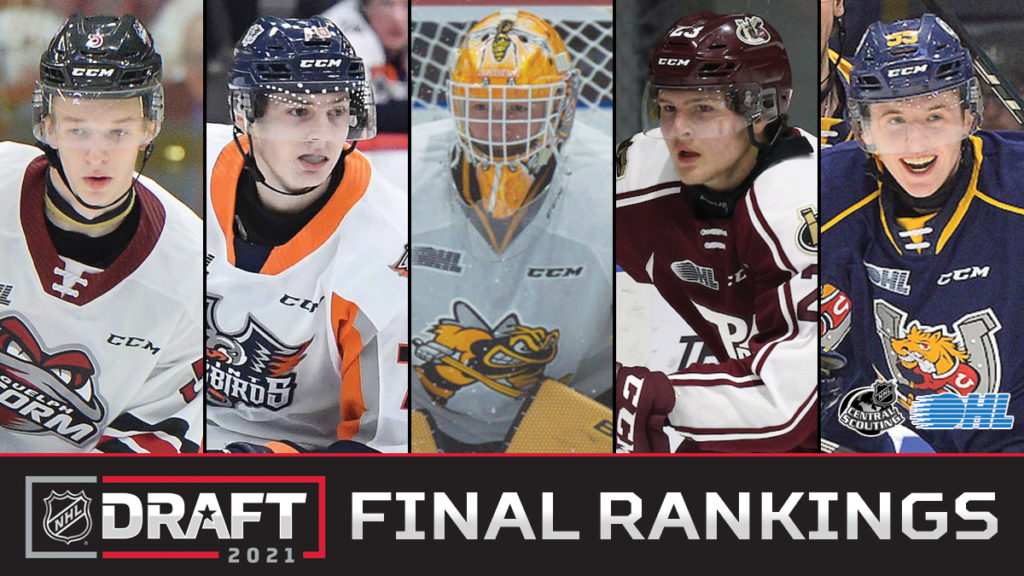 Toronto, Ont. – The Ontario Hockey League is pleased to recognize 61 players included on NHL Central Scouting’s Final Rankings for the 2021 NHL Draft to be held on July 23-24.

A total of 55 players on Central Scouting’s North American rankings in addition to six from the International list combine to include 37 forwards, 19 defencemen and five goaltenders, all of whom have played at least one game in the Ontario Hockey League. An additional 13 players who had committed for the 2020-21 season, but who have yet to play in an OHL game were also listed.

Peterborough Petes centre and recent IIHF World Under-18 Hockey Championship gold medalist Mason McTavish comes in as the second-ranked North American skater on the list. The 18-year-old from Carp, Ont. scored 29 goals and added 13 assists, finishing with 42 points in 57 games as a rookie with the Petes in 2019-20. McTavish wore an ‘A’ for Canada at the U18 Worlds, finishing with 11 points (5-6–11) over seven games.

“McTavish is that coveted skilled power centre who is capable of making a difference in any situation,” said NHL Central Scouting Director Dan Marr. “He’s big and plays a smart, competitive game. McTavish has deceptive speed and quickness. He utilizes his size to effectively protect pucks while driving to the net and can still make plays while being checked.”

The London Knights lead the League with seven players who have appeared in an OHL contest included on the rankings followed by the Barrie Colts, Kitchener Rangers, Ottawa 67’s, Peterborough Petes, Sarnia Sting, Soo Greyhounds and Windsor Spitfires all tied with four.

A total of 31 OHL players were taken in the 2020 NHL Draft including five chosen within the top-10 selections. Los Angeles Kings second overall choice Quinton Byfield (Sudbury Wolves) and Anaheim Ducks sixth pick Jamie Drysdale (Erie Otters) both made their NHL debuts this past season.

*-player committed to OHL club but has yet to appear in a game, not included in overall total