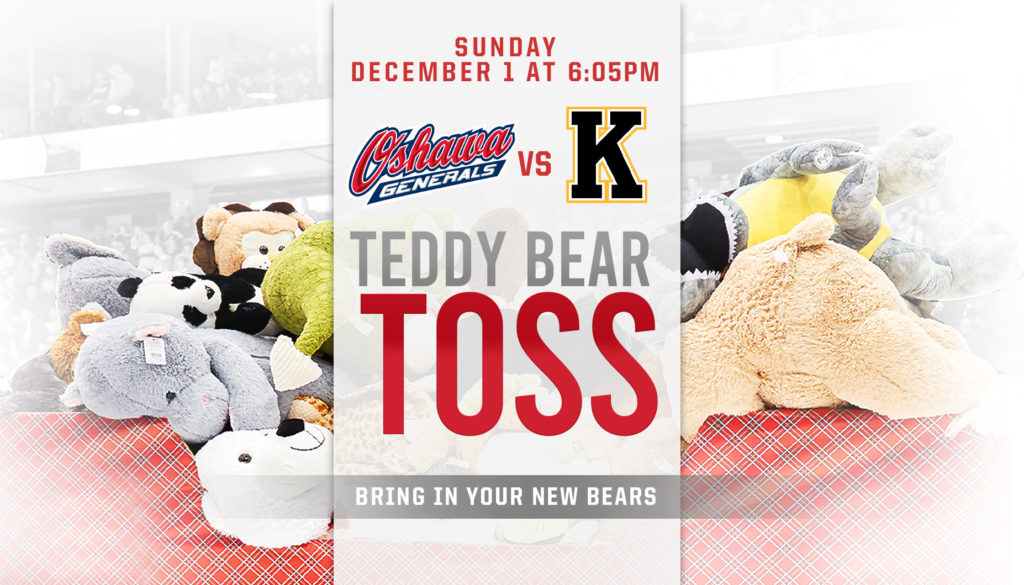 This Sunday, the Generals continue tradition as we celebrate the 22nd Annual Teddy Bear Toss in Oshawa presented by Canadian Tire! As the Gens take on the Kingston Frontenacs, fans will eagerly anticipate the first Gens goal of the game to let the teddy bears rain down! In the previous 21 years that the Teddy Bear Toss has been held, an incredible total of over 76,000 teddy bears have been thrown and collected for various charities to be used throughout the holidays.

We ask that fans bring new bears only to the game for donation and if possible to be in plastic bags.

After all the teddies have been tossed, each bear is collected and looked over before being given to their new homes. Only new bears will be able to make their way to a deserving family, so be sure to bring a new bear to make a positive difference this holiday season! This season teddy bears will go to the Durham Children’s Aid Foundation, Boys and Girls Club, YWCA, The Denise House and Simcoe Hall Settlement House.

The first year the Generals took part in the memorable event was in the 1998-1999 season. The first-ever toss commenced when former Gens defenceman Jim Baxter potted a first period goal to send the bears through the air. Since then, the list of players to score the iconic goal include current NHL players and Gens greats like Cal Clutterbuck, Anthony Cirelli and more!

Last year, the Oshawa Generals held their twenty-first annual Teddy Bear Toss during a game against the Windsor Spitfires. As per tradition, the home crowd waited for the team’s first goal to throw the bears and didn’t have to wait long. The teddy-raining goal was scored in the first period on the power-play by former Generals forward and current Boston/Providence Bruin, Jack Studnicka, sending 4,583 stuffed bears flying through the air.

Who will score the highly-anticipated goal this year to shower the rink in teddy confetti? Come join us at the Tribute Communities Centre on Sunday, December 1st at 6:05pm as the Gens take on the Kingston Frontenacs to find out for yourself and be part of an unforgettable night!